Urban legislators have long lamented that they do not get their fair share of bills passed in state governments, often blaming rural and suburban interests for blocking their efforts. Now a new study confirms one of those suspicions but surprisingly refutes the other.

The analysis—of 1,736 bills in 13 states over 120 years—found that big-city legislation was passed at dramatically lower rates than bills for smaller places.

However, rural and suburban colleagues should not be blamed for the dismal track record, conclude co-authors Gerald Gamm of the University of Rochester and Thad Kousser of the University of California, San Diego. Instead, the researchers found that infighting within city delegations undermines legislative success.

"The data show that because of their large numbers, delegations from major cities like Chicago or New York are more likely to be at odds on legislation than smaller delegations, muddling cues for others in the chamber," explains Gamm. "After all, if the delegates from a city can't coalesce behind a bill, why should legislators from other parts of the state vote for the law?"

"If you talk to people from big cities, they will tell you that they are at a disadvantage in seeking legislation. Right now, for example, Bill de Blasio, the mayor of New York City, cannot raise taxes on his own city's residents to pay for prekindergarten programs unless the state legislature passes a law authorizing the new revenue stream. Similarly, Antonio Villaraigosa, who just stepped down as mayor of Los Angeles, had to persuade the California state legislature to grant him authority over the city's schools. This has been going on for more than a century," says Gamm.

But this stranglehold on cities in many ways is counterintuitive, points out Kousser. It goes against a basic tenet of democracy—that majorities matter. "The assumption is that the largest legislative blocs should have an outsized influence on decision making," says Kousser. "But when it comes to cities, those with the largest number of delegates enter the race handicapped."

Reported in the paper "No Strength in Numbers" in the American Political Science Review, the analysis is based on a study of so-called district bills, legislation that affects only a single locality or county. The researchers are the first to document the disappointing fate of big-city legislation and to test with hard data the reasons metropolitan areas are often stymied in state politics.

Through statistical analysis of district bills from 1880 to 2000, Gamm and Kousser explored common explanations for the legislative troubles of big cities. Could it be that metropolitan areas are doomed by party politics when the city and the hinterland support opposing parties? Could the sheer number of bills that larger communities generate lead to a sort of "bill exhaustion"?

Or maybe the problem is straight-up fear and animus: "The great narrative in urban politics has been a story of unremitting hostility," write the authors.

"For the past century or more, city delegates have believed that rural and suburban areas dreaded the city's dominance or were threatened by racial or ethnic differences," says Gamm.

Surprisingly, however, the researchers found little or no effect when controlling for each of these factors. Instead, the dramatic and consistent link to legislative success was delegation size: the larger the city delegation, the more its bills were doomed. As city delegates increase in number, they are less united and tend to divide more along party lines—undermining the ability of urban areas to pass legislation, explain the authors. For cities with populations over 100,000, that "special burden" translated into a 29 percent passage rate in 1997.

"We were astonished how consistent bill failure was based on size and also surprised that there was little evidence of hostility toward the city," says Gamm.

The researchers found that even the redrawing of states' voting districts in the 1960s, predicted to increase urban representation and influence, backfired because of the crippling effect of larger delegation size. During this period, states moved to ensure equal numbers of voters among districts, increasing the number of delegates from urban areas, which traditionally had been underrepresented. Ironically, legislation passage rates for metropolitan areas after the 1960s were the lowest since the nineteenth century. Though reapportionment gave "urban areas greater representation, it also saddled them with more representatives and thus increased the chances that their delegations might be internally divided," Gamm and Kousser write.

If numbers don't help, what should a city do? "The only advice I have is to work together," says Gamm. "City delegations need to broker compromise before they get to the floor of the state legislature. If they can compromise, if a big city delegation can agree on a bill, our prediction is that they will be successful. But if, for example, the Houston delegation is split, and some support and others fight a bill, the bill will fail."

No strength in numbers 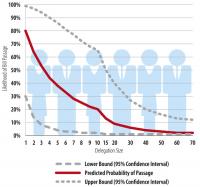