PHILADELPHIA (Jan.24, 2017) - Nursing with a Message, written by the University of Pennsylvania School of Nursing's Patricia D' Antonio, PhD, RN, FAAN, the Killebrew-Censits Term Professor in Undergraduate Education; Chair of the Department of Family and Community Health; Director of the Barbara Bates Center for the Study of the History of Nursing; and a Senior Fellow at the Leonard Davis Institute of Health Economics, reveals the key role that local public health programs--and the nurses who ran them--influenced how Americans perceived both their personal health choices and the well-being of their communities.

Mandated by the Affordable Care Act, public health demonstration projects have been promoted as an innovative solution to the nation's health care crisis. Yet, such projects actually have a long but little-known history, dating back to the 1920s. In the book, readers are transported to New York City in the 1920s and 1930s to chart the rise and fall of two community health centers, in the neighborhoods of East Harlem and Bellevue-Yorkville. D'Antonio examines the day-to-day operations of these clinics, as well as the community outreach work done by nurses who visited schools, churches, and homes encouraging neighborhood residents to adopt healthier lifestyles, engage with preventive physical exams, and see to the health of their preschool children.

As she reveals, these programs relied upon an often-contentious and fragile alliance between various healthcare providers, educators, social workers, and funding agencies, both public and private. Assessing both the successes and failures of these public health demonstration projects, D'Antonio also traces their legacy in shaping both the best and worst elements of today's primary care system.

D'Antonio is also the editor of the Nursing History Review and the author of American Nursing: A History of Knowledge, Authority, and the Meaning of Work, which won the 2011 Lavinia Dock Award. Nursing with a Message was published by Rutgers University Press in January 2017. 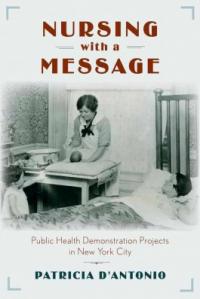 Nursing with a Message