MIAMI – A new study on biological erosion of mesophotic tropical coral reefs, which are low energy reef environments between 30-150 meters deep, provides new insights into processes that affect the overall structure of these important ecosystems. The purpose of the study was to better understand how bioerosion rates and distribution of bioeroding organisms, such as fish, mollusks and sponges, differ between mesophotic reefs and their shallow-water counterparts and the implications of those variations on the sustainability of the reef structure.

Due to major advancements in deeper underwater diving technology, a large renewal of interest in mesophotic reefs has pulsed through the scientific community because of their high biodiversity, vast extent, and potential refuge for shallower water reef species at risk from the impacts of climate change.

"Studying how mesophotic reefs function and thrive is especially critical now, when considering results from the new IPCC report reviewed by over 1700 expects said that coral reefs are the most vulnerable marine ecosystems on Earth to the adverse effects of climate change," said David Weinstein, Rosenstiel School Ph.D. student and lead author of the study. "Developing effective environmental management strategies for these important reef systems requires a basic fundamental understanding of the underlining architecture that supports and creates diverse biological ecosystems."

Weinstein and his research team used previously identified mesophotic reefs at 30-50 meters deep located in the U.S. Virgin Islands composed of a surprising number of coral growing on top different types of reef structures (patches, linear banks, basins) to better understand the role sedimentary processes have in creating and maintaining so many different structures that are critical for maximizing the biodiversity and health of the ecosystem. Researchers analyzed coral rubble and coral skeleton discs collected after one and two years of exposure to determine the sources and rates of bioerosion at these reefs.

Results of the study found that the architecturally unique structures in the study area experience significantly different bioerosion rates.

"This has very important implications when trying to predict how these reefs will grow over time and where preservation efforts might be most effective," said Weinstein.

Although erosion of the coral skeleton disks at the very deepest sites was more uniform, the researchers suggest that this is likely because the substrates used in the study were all of uniform composition, unlike the diverse composition of the sites. These results imply that bioerosional processes at these depths still exaggerate differences in reef structure depending on the amount of living and dead coral at each reef, the amount of time that material is exposed on the surface, and different localized current flows experienced.

The study also confirmed important concepts in coral geology research that lacked proof from studies venturing deeper than 35 meters. Coral reef bioerosion in the U.S. Virgin Islands and potentially in most of the Caribbean does generally decreases with depth. This result stems from the finding that parrotfish are now the most significant bioeroding group from shallow reefs down to a mesophotic reef transition zone identified by Weinstein at 30-35 meters in depth. The study also was able to conclude bioeroding sponges are the primary organisms responsible for long-term structural modification of mesophotic reefs beyond the transitional zone.

"Coral reefs are essentially a thin benthos veneer draped upon a biologically produced inorganic three-dimensional foundation that creates habitats for many marine organisms," said Weinstein. "Since mesophotic reefs grow so much slower than shallower reefs, identifying the sources and rate of erosion on mesophotic reefs is even more important to understand the long-term structural sustainability of these tropical reefs systems."

However, Weinstein suggests that other processes, such as coral growth rates and cementation, must also be more fully studied before scientists have a complete understanding of mesophotic coral reefs.

The paper, currently available online and scheduled for print in a special coral reef edition of the journal Geomorphology later this summer is one of the first to address mesophotic reef sedimentology.

More information, videos, pictures, and new developments can be found at: http://www.rsmas.miami.edu/users/dweinstein/ and at https://www.facebook.com/UmMesophoticGeologyLab

About the University of Miami's Rosenstiel School The University of Miami is one of the largest private research institutions in the southeastern United States. The University's mission is to provide quality education, attract and retain outstanding students, support the faculty and their research, and build an endowment for University initiatives. Founded in the 1940's, the Rosenstiel School of Marine & Atmospheric Science has grown into one of the world's premier marine and atmospheric research institutions. Offering dynamic interdisciplinary academics, the Rosenstiel School is dedicated to helping communities to better understand the planet, participating in the establishment of environmental policies, and aiding in the improvement of society and quality of life. For more information, please visit: http://www.rsmas.miami.edu. 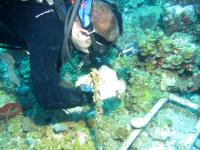