Many of the secrets of life, such as how we become a certain size and shape, have been uncovered in studies performed over more than 100 years and involving animal models such as the fruit fly Drosophila melanogaster. Now, IRB Barcelona researchers headed by ICREA Professor Marco Milán disclose a new signal that participates in the specification and growth of fly wings.

In Nature Communications, the scientists conclude that the JAK/STAT signalling pathway, known to be tightly linked to inflammatory processes and tumour growth, determines where, when and how a wing develops in Drosophila. PhD student Carles Recasens, who will defend his thesis with the results of this study in January, has discovered that "JAK/STAT appears at key time points in the development of the appendage and that it collaborates with Wingless/Wnt, Dpp/BMP and Hedgehog in wing specification and growth". These findings pave the way to studying the participation of JAK/STAT in human development and its possible implications in congenital diseases that involve limb malformation.

"Given the similarities in the molecules and the mechanisms involved in limb development in vertebrates and invertebrates, the fly is a very useful genetic model in which to identify new genes that potentially participate in limb development in vertebrates and their possible association with congenital diseases," says Ana Ferreira, who has participated in the study. Marco Milán, head of the Development and Growth Control Lab, adds that "the patterns that determine how flies and humans are built are very similar and the basic molecular mechanisms have been conserved throughout evolution. We share a lot of basic biology and we increasingly find that what happens in flies also happens in humans".

This work has identified three defined functions of JAK/STAT in fly development. First, it cooperates with Wingless (Wnt in humans) to specify where the wing will develop. Second, it helps cells that produce Hedgehog (Sonic hedgehog in humans) to survive and proliferate in order to induce the expression of Dpp (BMP in humans), a molecule that organises the patterning and growth of the whole wing. And third, it delimits the action of Dpp so that the wing grows in the right place. In summary, JAK/STAT controls the three main cell signals responsible for the specification and growth of limbs, both in vertebrates and invertebrates.

Carles Recasens and Ana Ferreira will be joining the recently opened Francis Crick Institute in London to undertake postdoc training, during which they will continue to address the fruit fly.

The fly reveals a new signal involved in limb growth 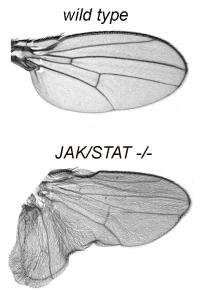