Extreme heat is an increasingly common occurrence worldwide, with heat-related deaths and illnesses also expected to rise. The authors of a new two-paper Series on Heat and Health, published in The Lancet, recommend immediate and urgent globally coordinated efforts to mitigate climate change and increase resilience to extreme heat to limit additional warming, avoid permanent and substantial extreme heat worldwide, and save lives by protecting the most vulnerable people.

In alignment with the Paris Agreement [1], the Series authors call for global warming to be limited to 1.5°C to avoid substantial heat-related mortality in the future. Reducing the health impacts of extreme heat is an urgent priority and should include immediate changes to infrastructure, urban environment, and individual behaviour to prevent heat-related deaths. The Series is published ahead of this year’s COP26 UN Climate Change Conference in Glasgow, UK.

Effective and environmentally sustainable cooling measures can protect from the worst health impacts of heat. These range from increasing green space in cities, wall coatings that reflect heat from buildings, and widespread use of electric fans and other widely available personal cooling techniques that have been shown by thermal physiologists to help people regulate their body temperature without exacerbating other types of physiological strain. While air conditioning is becoming more widely available around the world, it is unaffordable for many of the most vulnerable, is financially and environmentally costly, and leaves many defenceless against extreme heat during power outages.

“Two strategic approaches are needed to combat extreme heat. One is climate change mitigation to reduce carbon emissions and alter the further warming of the planet. The other is identifying timely and effective prevention and response measures, particularly for low-resource settings. With more than half of the global population projected to be exposed to weeks of dangerous heat every year by the end of this century, we need to find ways to cool people effectively and sustainably,” says Series co-lead author Professor Kristie Ebi from the University of Washington, USA. [2]

She adds, “Failure to reduce greenhouse gas emissions and to develop and deploy evidence-based heat action plans will mean a very different future awaits many people and communities around the world. Day-to-day summer activities – such as exercising and working outdoors – may change dramatically as increasing warming means people are at greater risk of exposure to intolerable heat far more often, particularly in tropical regions.” [2]

Health risks of extreme heat
According to a new Global Burden of Disease modelling study, also published in The Lancet, more than 356,000 deaths in 2019 were related to heat and that number is expected to grow as temperatures rise worldwide. However, Series authors note, many heat-related deaths are preventable by mitigating climate change and reducing exposure to extreme heat.

When exposed to extreme heat stress, the body’s ability to regulate its internal temperature can be overwhelmed, leading to heat stroke. In addition, physiological thermoregulatory responses that are engaged to protect body temperature induce other types of physiological strain and can lead to cardiorespiratory events (see Series paper 1, Figure 1). Effects from extreme heat are also associated with increased hospitalizations and emergency room visits, increased deaths from cardiorespiratory and other diseases, mental health issues, adverse pregnancy and birth outcomes, and increased healthcare costs. Older people and other vulnerable people who may be less able to take care of themselves in extreme heat (e.g., people isolated at home, people who have poor mobility) are also more likely to experience the health effects of extreme heat.

Extreme heat also lessens worker productivity, especially among the more than 1 billion workers who are exposed to high heat on a regular basis. These workers often report reduced work output due to heat stress, many of whom are manual laborers who are unable to take rest breaks or other measure to lessen the effects of heat exposure.

“Extremely hot days or heat waves that were experienced approximately every 20 years are now being seen more frequently and could even occur every year by the end of this century if current greenhouse gas emissions continue unabated. These rising temperatures combined with a larger and older population, mean that even more people will be at risk for heat-related health effects,” says Ebi. [2]

Effective cooling strategies for today and the future
To counter these health effects, the authors highlight accessible and effective cooling strategies at the individual, building, and urban and landscape level. They also recommend tailored approaches for specific settings including care homes, heavily populated urban areas, workplaces, schools, mass gatherings, refugee camps, and playing sport, where people may be particularly vulnerable to the effects of extreme heat.

The Series authors highlight actions individuals can take to cool themselves down and blunt other types of physiological strain that arise from regulating body temperature to combat health risks from extreme heat. These include using electric and misting fans, self-dousing with a water spray or sponge, wearing wet clothing, and immersing feet in cold water. Other simple measures such as taking short breaks from physical activity, remaining well hydrated (the temperature of water that is consumed has little consequence), and modifying clothing or protective equipment to improve ventilation are also effective and sustainable strategies (see infographic).

“The effects extreme heat exposure can have on the body present a clear and growing global health issue. There are many sustainable and accessible options to reduce effects of heat exposure if we focus on innovations for cooling down the body instead of cooling down the air around us,” says Series co-lead author Professor Ollie Jay of the University of Sydney, Australia. [2]

In addition to individual approaches to lowering physiological heat strain, adaptations to buildings can help cool indoor environments. These include external coatings to reflect heat away from buildings and green walls to reduce surface temperatures, improved insulation and glazing, and better ventilation through and around buildings. Features of the urban environment and surrounding landscape also influence conditions in built-up areas. Lakes, large grasslands and parks, and shaded outdoor areas, as well as reducing pollution within cities are important.

To protect populations, heat action plans, which include early warning systems and robust surveillance and monitoring, must include evidence-based cooling strategies.

Professor Jay says: “It is critical that the personal cooling strategies we recommend in heat-health action plans are based on scientific evidence. After all, having a plan is not enough; it must be the right plan. Too many strategies that are recommended in some existing heat-health action plans seem to be based on conventional wisdom. For example, it is commonly recommended that sugary drinks and high protein meals are avoided, and that fans should not be used, yet studies demonstrate the cooling effectiveness of fans at higher temperatures and other strategies such as self-dousing with water or wearing wet clothing. Early warning systems for extreme heat events, including evidence-based measures to protect vulnerable populations and raising awareness of the health risks posed by heat, will be central to limiting ill health and deaths from heat events, today and in the future.” [2]

“As a result of human activity, it is inevitable that much of the planet’s population will in future be at greater risk of exposure to extreme heat than they are today. Amid stark projections about the increasing effects of climate change, urgent investment in research and measures to combat the risks of extreme heat is critical if society is to not only survive, but thrive, in a hotter future world,” adds Jay. [2]

A Lancet editorial adds: “[…] action plans provide measures to adapt to extreme heat, but do not tackle a root cause of heat extremes—greenhouse gas emissions. Minimising the effects of temperature on health requires both prevention of and adaptation to a changing climate… But there is a danger that promises and pledges to tackle the climate crisis will not be reflected in decisive action and effective policies. Leaders at the [COP26] meeting must provide transformative regulatory frameworks, policy, and investment to ensure sustainable climate change mitigation and adaptation. The papers we publish today provide a strong scientific argument that the health dimensions of heat can no longer be overlooked.”

Extreme temperatures are on the rise (GBD paper)
As reported in previous studies, both high and low temperatures lead to increased deaths and ill health. In addition to the 356,000 deaths estimated from heat in the new Global Burden of Disease study, researchers also estimate that 1.3 million deaths were related to cold in 2019. The study links non-optimal temperature related deaths to 17 specific causes of disease, and highlights the relevance of cardiorespiratory and metabolic mortality, as well as external causes of death such as interpersonal violence, self-harm, drowning, and injuries [3].

In most places, cold temperatures were linked with more deaths than heat, with a 31% increase in cold related deaths since 1990. In contrast, deaths attributable to heat during the study period increased by 74%, suggesting a growing of extreme heat mortality, particularly in hotter regions of the world. The authors note that the study is based on mortality data from nine countries and that the global estimates may underestimate the impact of temperature extremes in locations with greater temperature sensitivity, and overestimate them in places with less temperature sensitivity. In addition, cause-specific mortality data was not available for Europe or south and southeast Asia, and included only one country in sub-Saharan Africa.

Study co-author Dr Katrin Burkart, Institute of Health Metrics and Evaluation, University of Washington, USA, said: “Where people live has a major bearing on their risk of exposure to extreme heat and cold. In most regions, cold temperatures have a greater impact on health, however, our analysis finds that the harmful effects of extreme heat can far exceed those caused by cold in places where it is already hot, such as Southern Asia, the Middle East and many parts of Africa. This is very concerning, particularly given that the risk of exposure to high temperatures appears to have been increasing steadily for decades.” [2]

The modelling study was funded by the Bill & Melinda Gates Foundation. It was conducted by researchers from the University of Washington, USA, University of British Columbia, Canada, and the Chinese Center for Disease Control and Prevention.

The Lancet Heat and Health Series 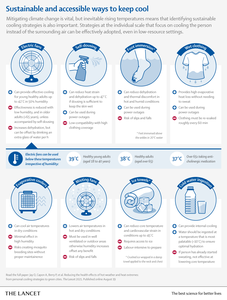