As the world gathers for COP26 in Glasgow, scientists have found the smoking gun in forensic lightning pathology that will help develop life-saving knowledge to address the lethal effects of the increasing number and severity of thunderstorms and lightning strikes due to global climate change.

Johannesburg, South Africa – New research by scientists from South Africa and the UK could help forensic teams understand whether people or animals were the victims of fatal lightning strikes, based solely upon an analysis of their skeletons. Their study is published in the journal Forensic Science International: Synergy, and titled Harnessing Thor's Hammer: Experimentally induced lightning trauma to human bone by high impulse current

Climate change is increasing and there is evidence to suggest the incidence and severity of thunderstorms and lightning strikes could increase. Sadly, fatal strikes are common on wild animals, livestock, and people - with African countries having some of the highest fatality rates in the world.

In South Africa, more than 250 people are killed annually by lightning, whereas 24, 000 people worldwide die each year. When a lightning death is suspected, the forensic pathologist determines cause of death by looking for signs of lightning-trauma to skin and organs of the deceased. However, when the body is skeletonised, soft tissues are absent and cause of death by lightning cannot be attributed.

This new research provides a tool to investigate cause of death when skeletonised remains are recovered as part of accident or death investigation.

According to Dr Nicholas Bacci, Lecturer in the School of Anatomical Sciences at Wits University and lead author of the paper, “identifying a fatality caused by lightning strike is usually done though marks left on the skin, or damage to the internal organs - and these tissues don’t survive when bodies decompose. Our work is the first research that identifies unique markers of lightning damage deep within the human skeleton and allows us to recognise lightning when only dry bone survives. This may allow us to recognise accidental death versus homicide in cases where cause is not apparent, whilst at the same time allowing us to build a more complete picture of the true incidence of lightning fatalities.”

The research was undertaken as collaboration between specialists in forensic anthropology, anatomy, lightning physics, and micro-computed tomography (micro-CT) from the University of the Witwatersrand (Wits University) in South Africa, Northumbria University in the UK, and the Nuclear Energy Corporation of South Africa (NECSA).

The researchers generated artificial lightning in the laboratory, which was then applied directly to human bone, extracted from donated cadavers who had died of natural causes.

Dr Hugh Hunt from the Johannesburg Lightning Research Laboratory (JLRL) at Wits University explains “we used equipment to generate high impulse currents in the lab, (up to 10,000 Amps), which mimicked the effect of lightning passing through the skeleton. Natural lightning can often have significantly higher peak currents but this allowed us to have much greater control over the experiment than trying to somehow place human tissue in the path of a natural lightning strike,” says Hunt, a Senior Lecturer and Head of the JLRL in the School of Electrical and Information Engineering.

What the experiments showed was a pattern of damage to bone that was uniquely caused by short duration lightning current.

Senior author Dr Patrick Randolph-Quinney, Associate Professor from the Forensic Science Research Group at Northumbria University, and the Centre for the Exploration of the Deep Human Journey at Wits University, explains “using high-powered microscopy we were able to see that there is a pattern of micro-fracturing within bone caused by the passage of lightning current. This takes the form of cracks which radiate out from the centre of bone cells, or which jump irregularly between clusters of cells. The overall pattern of damage looks very different when compared to other high energy trauma, such as that caused by burning in fire.”

“Even though this experiment was conducted under controlled conditions in the lab, we see the same trauma in animals killed by natural lightning. We were able to compare the human results with bone from a poor giraffe killed by lightning – and the pattern of trauma is identical even though the micro-structure of human bone is different from animal bone. This is the smoking gun that we were looking for in forensic lightning pathology,” he adds.

What is unique about this research is that is brought together different disciplines with a common focus on trying to understand the effects of lightning on the body, with the long-term aim of making the environment safer for those at risk of being killed by lightning.

Associate Professor Ken Nixon from the School of Electrical and Information Engineering at Wits University and member of the Board of Directors of the African Centre for Lightning and Electromagnetics Network explains: “This is a multi-disciplinary project, which highlights how forensic scientists can work with physicists and engineers to explore a real-world problem, which is implicated in the deaths of many people annually, and especially in countries such as South Africa, Zambia and Uganda.”

“At a time when global climate change is driving increases in the number and severity of thunderstorms and lightning strikes, we need more research like this, bringing together different fields with real experience of dealing with lightning. Ultimately our aim at Wits is to make our built environment and countryside safer for those exposed to the lethal effects of lightning energy in South Africa, and to provide life-saving knowledge for those around the globe who are increasingly put in harm’s way of this natural phenomenon,” he says.

This research would not have been possible without state-of-the-art imaging technologies based in the School of Anatomical Science in the Faculty of Health Sciences at Wits, and the micro-CT facility at the Nuclear Energy Corporation of South Africa at Pelindaba.

“Researchers in South Africa are absolutely at the forefront of bringing together cutting edge imaging methods to discover new and ground-breaking knowledge about the skeleton of modern and ancient humans,” notes Dr Tanya Augustine, an anatomist based at Wits Medical School, who co-led the research and is corresponding author on the paper.

“Over the last few years teams at Wits and NECSA have unlocked the secrets of cancer in the hominin fossil record, provided evidence for cause of death in australopithecines, and now these techniques are allowing us to unlock the mysteries of fatal lightning strikes,” she adds.

The Conversation: Forensic science is unlocking the mysteries of fatal lightning strikes

Next year Wits University will be hosting the International Conference on Lightning Protection, the premier lightning conference in the world, for the first time in Africa. This follows the successful bid by Professor Ian Jandrell, a renowned expert in the field of lightning, high voltage engineering and forensic engineering, and currently the Deputy Vice-Chancellor: Systems and Operations at Wits University. The conference will take place from 2 – 7 October 2022 in Cape Town, South Africa. Learn more: https://youtu.be/1pCe-6gLjHI.

Board Member: African Centre for Lightning and Electromagnetics Network http://aclenet.org

The University of the Witwatersrand (Wits University) is a leading African university ranked in the top 1% of universities in the world. In 2022, Wits celebrates 100 years of academic and research excellence, social justice, and the advancement of the public good. In our pursuit to positively impact humanity, our innovative technology-driven research aims to transform and prepare society for a collective and common digital future. Our research output has doubled in the past five years and offers new ways to impact society for good, as well as astounding ‘moonshot moments’ that give us hope and inspiration. Visit https://wits100.wits.ac.za/. #WitsForGood 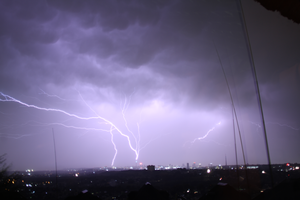