A first-of-its-kind, high-resolution mapping analysis estimates the amounts of nitrogen and pathogens released into coastal ecosystems from human wastewater sources around the world. Cascade Tuholske (now affiliated with the Columbia Climate School) and colleagues at the University of California, Santa Barbara, present this research in the open-access journal PLOS ONE on November 10, 2021. The researchers have created a visual representation of this, available here.

Human sewage can introduce disease-causing pathogens and nitrogen into the ocean, potentially impacting human health as well as coastal ecosystems and the communities that depend on them for such purposes as fishing. However, most research into humans’ impact on coastal ecosystems has focused on agricultural runoff, while investigations on human sewage have been limited.

To better capture the impact of sewage on coastal ecosystems, Tuholske and colleagues conducted a novel analysis in which they estimated and mapped nitrogen and pathogen inputs into the ocean from sewage for about 135,000 watersheds around the world at a resolution of 1 kilometer. The assessment employed newly available, high-resolution data on global human populations and modeled how wastewater plumes entering the ocean would overlap with different ecosystems.

The analysis suggests that wastewater from human sewage introduces 6.2 teragrams of nitrogen into coastal ecosystems per year—for comparison, that is about 40 percent of estimated inputs from agriculture. Sixty-three percent of the nitrogen is from sewage systems, 5 percent from septic systems, and 32 percent from untreated, direct input.

Of the watersheds that appear to release the most nitrogen from sewage, most are located in India, Korea, and China, with the Chang Jiang (Yangtze) River contributing 11 percent of the global total. The researchers also identified hotspots for coral reef exposure to nitrogen in China, Kenya, Haiti, India, and Yemen. Seagrass exposure hotspots were found in Ghana, Kuwait, India, Nigeria, and China. The Chang Jiang and Brahmaputra Rivers have the highest input of pathogens.

Further research will be needed to refine the model and its estimates. Nonetheless, this work provides a new resource that could play a key role in efforts to mitigate harm to ecosystems and human health—such as by highlighting locations where tradeoffs between managing nitrogen and pathogen levels are particularly important to consider.

The authors add: "The sheer scale of how much wastewater is impacting coastal ecosystems worldwide is staggering. But because we map wastewater inputs to the ocean across more than 130,000 watersheds, our results identify target priority areas to help marine conservation groups and public health officials to work together and reduce the impacts of wastewater on coastal waters across the planet."

Capturing the impact of human sewage on Earth’s coastal ecosystems 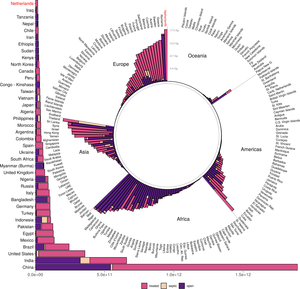 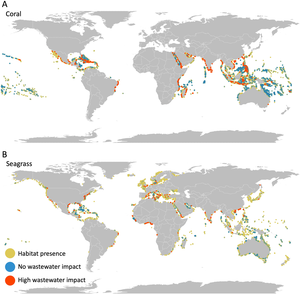