All the money in the world couldn’t save Apple co-founder Steve Jobs from pancreatic cancer, but a world first drug developed by UniSA scientists may provide the breakthrough for 500,000 other people currently battling the disease.

While Jobs lived for eight years after diagnosis, 90 per cent of patients die within five years, a statistic that UniSA Head of Drug Discovery and Development, Professor Shudong Wang is hoping to reverse.

Taken as an oral capsule, Auceliciclib is already demonstrating great potential in clinical trials to treat glioblastoma, the most aggressive form of brain cancer. Prof Wang, a world-renowned cancer researcher, is now hoping to recruit pancreatic cancer patients for a clinical trial of the drug.

The University has launched a matched-funds campaign to seek support for the trial.

Both these cancers share an insidious reputation for being two of the hardest to treat, with low survival rates and late diagnosis.

“Pancreatic cancer is extremely difficult to diagnose at an early stage because there are very few symptoms,” Prof Wang says.

“If it is caught early the malignant tumour can be surgically removed, but once it spreads into other organs it is lethal, and chemotherapy and radiotherapy only buy patients a little extra time.”

Auceliciclib has been designed to specifically target CDK4/6 enzymes, which have impaired function in pancreatic cancer, making it more effective with fewer side effects compared to the current therapy.

“Cancer doesn’t always discriminate. Rich, healthy and young people, including those with access to the best medical treatment, can all fall victim to it,” says Prof Wang.

Her team is also working on a novel biomarker for pancreatic cancer, hoping to undertake genetic profiling of patients to see if they have any common characteristics.

The matched-funding campaign has been kickstarted with $350,000 from UniSA with the same amount needed by the end of the year to progress planning for the trial.

Further information about the project and how to make donations is available at: https://giving.unisa.edu.au/causes/cancer-research 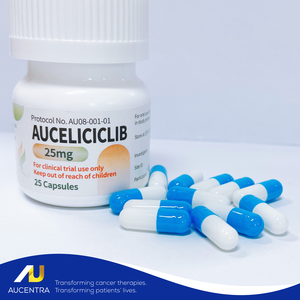