A study led by Simon Fraser University researchers has found that the retreat of glaciers in the Pacific mountains of western North America could produce more than 6,000 kilometres of potential new Pacific salmon habitat by the year 2100.

The researchers modeled glacier retreat under different climate change scenarios—essentially ‘peeling back the ice’ from 46,000 glaciers between southern BC and southcentral Alaska—to look at how much potential salmon habitat would be created when the underlying bedrock is exposed and new streams flow over the landscape.

Desirable for salmon, in this case, means ocean-accessible, low-gradient streams with retreating glaciers at their headwaters—315 of the glaciers considered fit that bill.

Under a moderate climate scenario, those glaciers are predicted to reveal around 6,150 km of potential new salmon habitat throughout the Pacific mountains of western North America by 2100—a distance nearly equal the length of the Mississippi River (6,275 km).

“We predict that most of the emerging salmon habitat will occur in Alaska and the transboundary region, at the British Columbia‒Alaska border, where large coastal glaciers still exist,” says SFU spatial analyst Kara Pitman, the study’s lead author. The Gulf of Alaska sub-region is predicted to see the most gains—a 27 per cent increase in salmon-accessible habitat by 2100.

And once conditions stabilise in the newly formed streams, salmon can colonize these areas quite quickly.

“It’s a common misconception that all salmon return home to the streams they were born in,” Pitman says. “Most do, but some individuals will stray—migrating into new streams to spawn and, if conditions are favorable, the population can increase rapidly.”

One example is Stonefly Creek in Glacier Bay, Alaska, where glacier retreat in the late 1970s revealed salmon spawning habitat in the new stream that was colonized within 10 years by pink salmon that grew rapidly to more than 5,000 spawners.

The researchers caution that while the newly created habitat may be a ray of light for salmon in some locations, overall, climate change poses grave challenges for salmon populations.

“On one hand, this amount of new salmon habitat will provide local opportunities for some salmon populations,” says Pitman. “On the other hand, climate change and other human impacts continue to threaten salmon survival—via warming rivers, changes in stream flows, and poor ocean conditions.”

Climate change means we increasingly need to look to the future, she says. “We can’t just protect current-day habitat for species but need to consider what habitats they might rely on in the future.”

SFU biology professor and paper co-author Jonathan Moore adds, “Climate change is rapidly transforming ecosystems. Here we show where and when glacial retreat will create new streams for salmon. If we want to protect salmon futures, this information should inform environmental decision-making and habitat protection.”

Melting glaciers could produce 1,000s of kilometers of new Pacific salmon habitat by 2100 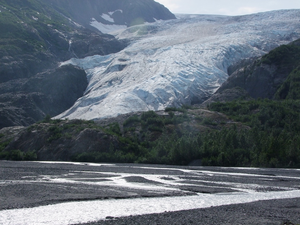 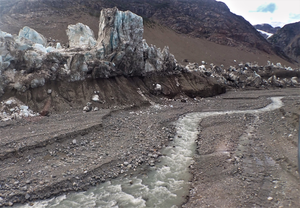