Exoplanets are experiencing a stratospheric rise. In the three decades since the first confirmed planet orbiting another star, scientists have catalogued more than 4,000 of them. As the list grows, so too does the desire to find Earth-like exoplanets — and to determine whether they could be life-sustaining oases like our own globe.

The coming decades should see the launch of new missions that can gather ever-larger amounts of data about exoplanets. Anticipating these future endeavors, a team at the University of Washington and the University of Bern has computationally simulated more than 200,000 hypothetical Earth-like worlds — planets that have the same size, mass, atmospheric composition and geography as modern Earth — all in orbit of stars like our sun. Their goal was to model what types of environments astronomers can expect to find on real Earth-like exoplanets.

As they report in a paper accepted for publication November 2021 in the Planetary Science Journal and submitted Dec. 6 to the preprint site arXiv, on these simulated exoplanets, one common feature of present-day Earth was often lacking: partial ice coverage.

“We essentially simulated Earth’s climate on worlds around different types of stars, and we find that in 90% of cases with liquid water on the surface, there are no ice sheets, like polar caps,” said co-author Rory Barnes, a UW professor of astronomy and scientist with the UW’s Virtual Planetary Laboratory. “When ice is present, we see that ice belts — permanent ice along the equator — are actually more likely than ice caps.”

The findings shed light on the complex interplay between liquid water and ice on Earth-like worlds, according to lead author Caitlyn Wilhelm, who led the study as an undergraduate student in the UW Department of Astronomy.

“Looking at ice coverage on an Earth-like planet can tell you a lot about whether it’s habitable,” said Wilhelm, who is now a research scientist with the Virtual Planetary Laboratory. “We wanted to understand all the parameters — the shape of the orbit, the axial tilt, the type of star — that affect whether you have ice on the surface, and if so, where.”

The team used a 1-D energy balance model, which computationally imitates the energy flow between a planet’s equator and poles, to simulate the climates on thousands of hypothetical exoplanets in various orbital configurations around F-, G- or K-type stars. These classes of stars, which include our own G-type sun, are promising candidates for hosting life-friendly worlds in their habitable zones, also known as the “Goldilocks” zone. F-type stars are a bit hotter and larger than our sun; K-type stars are slightly cooler and smaller.

In their simulations, the orbits of the exoplanets ranged from circular to a pronounced oval. The team also considered axial tilts ranging from 0 to 90 degrees. Earth’s axial tilt is a moderate 23.5 degrees. A planet with a 90-degree tilt would “sit on its side” and experience extreme seasonal variations in climate, much like the planet Uranus.

According to the simulations, which encompassed a 1-million-year timespan on each world, Earth-like worlds showed climates ranging from planet-wide “snowball” climates — with ice present at all latitudes — to a steaming “moist greenhouse,” which is probably similar to Venus’ climate before a runaway greenhouse effect made its surface hot enough to melt lead. But even though most environments in the simulations fell somewhere between those extremes, partial surface ice was present on only about 10% of hypothetical, habitable exoplanets.

The model included natural variations over time in each world’s axial tilt and orbit, which in part explains the general lack of ice on habitable exoplanets, according to co-author Russell Deitrick, a postdoctoral scientist at the University of Bern and researcher with the Virtual Planetary Laboratory.

“Orbits and axial tilts are always changing,” said Deitrick. “On Earth, these variations are called Milankovitch cycles, and are very small in amplitude. But for exoplanets, these changes can be quite large, which can eliminate ice altogether or trigger ‘snowball’ states.”

When partial ice was present, its distribution varied by star. Around F-type stars, polar ice caps — like what Earth sports currently — were found about three times more often than ice belts, whereas ice belts occurred twice as often as caps for planets around G- and K-type stars. Ice belts were also more common on worlds with extreme axial tilts, likely because seasonal extremes keep the polar climates more volatile than equatorial regions, according to Wilhelm.

The team’s findings about ice on these simulated Earth-like worlds should help in the search for potentially habitable worlds by showing astronomers what they can expect to find, especially regarding ice distribution and the types of climates.

“Surface ice is very reflective, and can shape how an exoplanet ‘looks’ through our instruments,” said Wilhelm. “Whether or not ice is present can also shape how a climate will change over the long term, whether it goes to an extreme — like a ‘snowball Earth’ or a runaway greenhouse — or something more moderate.”

Ice alone, or its absence, does not determine habitability, though.

“Habitability encompasses a lot of moving parts, not just the presence or absence of ice,” said Wilhelm.

Life on Earth has survived snowball periods, as well as hundreds of millions of ice-free years, according to Barnes.

“Our own planet has seen some of these extremes in its own history,” said Barnes. “We hope this study lays the groundwork for upcoming missions to look for habitable signatures in exoplanet atmospheres — and to even image exoplanets directly — by showing what’s possible, what’s common and what’s rare.”

Rachel Mellman, a recent UW graduate in astronomy, is a co-author on the paper. The research was funded by NASA through grants to the Virtual Planetary Laboratory.

For more information, contact Barnes at rkb9@uw.edu and Wilhelm at cwilhelm@uw.edu.

‘Would you like a little ice with your exoplanet?’ For Earth-like worlds, that may be a tall order 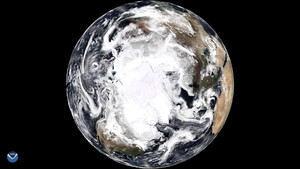