One of the consequences of globalization is the inadvertent spread of invasive plant and animal species. Land flatworms have invaded the entire world, principally via the plant trade. More than ten species are now widespread, such as Obama nungara (originally from Argentina), Platydemus manokwari (from New Guinea) and Bipalium kewense (from Southeast Asia).

An international team led by Professor Jean-Lou Justine from ISYEB (Muséum National d'Histoire Naturelle, Paris, France) reports the description of two new species of hammerhead flatworms. This is the first study of these species, reported in an article published in the Open Access journal PeerJ.

Land flatworms are predators of soil animals, including earthworms, slugs, and snails. They are a threat to soil biodiversity and ecology when they are introduced in a new environment. Hammerhead flatworms are specialized members of this family showing a broadened head. A number of species of hammerhead flatworms have been described by scientists, not from specimens from their land of origin, but from specimens obtained from the countries already invaded. This is the case, for instance, for the two species found in the USA, Bipalium pennsylvanicum and Bipalium adventitium, which originate from Asia but were not reported from any Asian country. The two new species described in this new paper follow a similar pattern.

The research  highlights the problem of alien species, and their potential to become invasive. They are one of the major threats to biodiversity,  with considerable cost impacts on the economy. A full range of techniques were used, including citizen science, field expeditions, macro photography, classical morphology, and new generation sequencing in molecular biology.

Hammerhead flatworms include some “giants” among land flatworms, with one species reaching one metre in length. However, the new species described here are small, possibly explaining why they escaped the attention of researchers before.

The first new species was named Humbertium covidum in reference to the work being completed during lockdowns caused by the global pandemic and "as homage to the victims of COVID-19,” write the authors. It was found in two gardens in the Pyrénées-Atlantiques (France) and also in Veneto (Italy). It is small (30 mm) and looks uniformly metallic black, an unusual color among hammerhead flatworms. Through genetic analyses of its intestinal contents, the researchers found that these flatworms consume small snails. The species’ origin is probably Asia, and it is potentially invasive.

The second new species was named Diversibipalium mayottensis and was only found in Mayotte (a French island in the Mozambique Channel, Indian Ocean). The species is small (30 mm) and exhibits a spectacular green-blue iridescence over brown ground colour. Genetic analyses, including mitogenomes, showed that this species was the sister-group of all other hammerhead flatworms (subfamily Bipaliinae) and is thus of special interest for understanding the evolution of these worms. Its origin could be Madagascar, from where it would have been inadvertently brought to Mayotte by people at some time in the past.

Jean-Lou Justine said “Due to the pandemic, during the lockdowns most of us were home, with our laboratory closed. No field expeditions were possible. I convinced my colleagues to gather all the information we had about these flatworms, do the computer analyses, and finally write this very long paper. We decided to name one of the species “covidum”, paying homage to the victims of the pandemic.”

In addition to classical anatomical and morphological descriptions, the researchers used the characters of complete mitogenomes to characterize the new species. Mitochondrial genomes (or mitogenomes) with about 15,000 base pairs, provide a significant amount of information, especially details about their genes. The researchers, who had previously studied the mitogenomes in four species of land flatworms, describe here the complete mitogenomes of five species of  hammerhead flatworms. Complete mitogenomes and other sequences generally used for phylogeny, such as those of Small and Large Subunit Ribosomal RNA (SSU and LSU), allowed the research team to propose the first molecular study of relationships within the hammerhead flatworms (subfamily Bipaliinae).

Jean-Lou Justine is an Academic Editor of PeerJ. 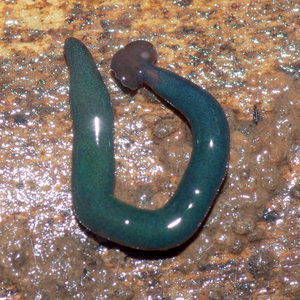