A new tool can better assess an important but overlooked indicator of global warming: the variety of bugs, worms, and snails living in high mountain streams.

Water-based invertebrates are especially vulnerable when the climate swings from historic droughts to massive floods. Because they serve as food for other forms of alpine life, such as birds, bats, frogs and fish, ecologists worry about the insects’ ability to thrive.

Understanding how these small creatures are affected by climate change requires understanding where we ought to find them. Yet, classic ecological theories did not account for what a team of UC Riverside ecologists and their UC collaborators found on a recent survey of aquatic life in California’s Sierra Nevada.

As a step toward protecting them, the team applied a new theory for predicting biodiversity to high mountain streams. That theory, and the results of the field survey that gave rise to it, are now detailed in an article in the journal Ecological Monographs.

“We’ve come up with new ways of thinking about biodiversity in high mountain Sierra streams, because the old ways weren’t successful for us,” said Kurt Anderson, associate professor of evolution and ecology, and article co-author.

“Classic theories of stream ecology weren’t developed in the Sierras, so we are adapting a new set of ideas to better explain what we’re seeing up there,” Anderson said.

One such classic theory is the River Continuum Concept, which discusses how stream ecosystems function as they move from the stream sources down to bigger, more open rivers. According to the continuum concept, there should be a smooth gradient of change from high to low elevations. The team surveyed for stream biodiversity along a gradient, to test concepts like this one.

“We saw a change, but only partially and not for the reasons the theory said we should,” Anderson said. “For example, we found that lakes tended to interrupt the smooth change we were supposed to have seen.”

The UCR team observed that diversity of invertebrates generally increased in waters headed down and was lowest in steams situated immediately below lakes.

“We believe the lakes may have a disconnecting effect and are causing the downstream waterways to have to start over again in building diversity,” said Matthew Green, UCR ecologist and first author on the new paper.

The team also found a great variety of life forms in cold, isolated streams high up in the headwaters. Despite the general trend toward an increase of diversity moving downstream, sometimes, differences in species among isolated headwaters could be as great as those between upstream and downstream.

“These are the aquatic life forms that are at the edge of the precipice of climate change,” said Dave Herbst, a researcher from the Sierra Nevada Aquatic Research Laboratory, a UC Natural Reserve, and co-author on the paper.

The areas just below lakes were dominated by only a few species of invertebrates and insects with the ability to filter food particles. Other sites with mixed food sources had more species present.

The team recommends that interconnected systems of flowing water be protected from diversions, and from habitat damage caused by unrestrained land development. When waters are allowed to flow as they should, the number of resources available to creatures that live in them support higher diversity.

“That is what will permit these small, but crucially important life forms to thrive,” Anderson said. “Where intact habitats have been compromised, restoration efforts may be key to providing the entire ecosystem with resilience to the coming adversities of climate change.” 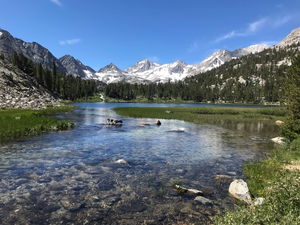