Scientists had long wondered how woodpeckers can repeatedly pound their beaks against tree trunks without doing damage to their brains. This led to the notion that their skulls must act like shock-absorbing helmets. Now, researchers reporting in the journal Current Biology on July 14 have refuted this notion, saying that their heads act more like stiff hammers. In fact, their calculations show that any shock absorbance would hinder the woodpeckers’ pecking abilities.

“By analyzing high-speed videos of three species of woodpeckers, we found that woodpeckers do not absorb the shock of the impact with the tree,” says Sam Van Wassenbergh (@UAFunMorph) of Universiteit Antwerpen, Belgium.

Van Wassenbergh and colleagues first quantified the impact decelerations during pecking in three woodpecker species. They used the data to build biomechanical models, which led them to the conclusion that any shock absorbance of the skull would be disadvantageous for the birds.

But if their skulls don’t act as shock absorbers, does the furious pecking put their brains at risk? It turns out that it doesn’t. While the deceleration shock with each peck exceeds the known threshold for a concussion in monkeys and humans, the woodpeckers’ smaller brains can withstand it. Van Wassenbergh says that woodpeckers could make a mistake, for instance if they were to peck on metal at full power. But their usual pecking on tree trunks is generally well below the threshold to cause a concussion, even without their skulls acting as protective helmets.

“The absence of shock absorption does not mean their brains are in danger during the seemingly violent impacts,” says Van Wassenbergh. “Even the strongest shocks from the over 100 pecks that were analyzed should still be safe for the woodpeckers’ brains as our calculations showed brain loadings that are lower than that of humans suffering a concussion.”

The findings refute the long-held theory of shock absorption, which has been popularized in the media, books, zoos, and more, says Van Wassenbergh. “While filming the woodpeckers in zoos, I have witnessed parents explaining to their kids that woodpeckers don’t get headaches because they have shock absorber built into their head,” he says. “This myth of shock absorption in woodpeckers is now busted by our findings.”

From an evolutionary point of view, he says the findings may explain why there aren’t woodpeckers with much larger heads and neck muscles. While a larger woodpecker could deliver more powerful pecks, concussions likely would cause them major problems.

The findings also have some practical implications, he adds, given that engineers have previously used the anatomy of the woodpecker’s cranial skeleton as a source of inspiration for the development of shock-absorbing materials and helmets. The new findings show that’s not such a good idea, given that woodpecker anatomy minimizes shock absorption.

Van Wassenbergh notes that another recent study by his team showed that woodpeckers’ beaks often get stuck, but the birds free themselves quickly by alternating movement of the upper and lower halves of their beaks.  They’re now studying how beak shape is adapted for pecking.

This research was supported by grants from the University of Antwerp, the Agence National de la Recherche, and the European Union’s Horizon 2020 program. 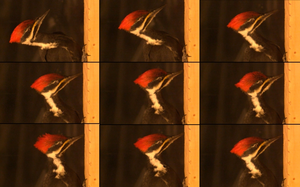