One of the things that makes mammals, mammals is that we’re warm-blooded-- our bodies have high metabolisms that maintain our internal temperature independent of our surroundings, unlike cold-blooded animals like lizards that have to bask in the sun. Among modern animals, only mammals and birds are warm-blooded, and our ability to keep ourselves warm has enabled mammals to survive in icy weather and make long migrations. But it’s been a mystery exactly when mammals evolved their high metabolisms. In a new study in Nature, scientists point to an unlikely source for determining when ancient mammal ancestors became warm-blooded: the size of tiny structures in their inner ears.

It’s hard to tell whether a fossil animal was warm-blooded-- we can’t take the temperature of a creature that lived hundreds of millions of years ago, and we can only guess at whether its behavior matched an active, warm-blooded metabolism or a slower cold-blooded one. But a team of researchers led by London’s Natural History Museum, the University of Lisbon’s Instituto Superior Técnico, and the Field Museum in Chicago realized that animals’ ears provide an indirect clue about their body temperatures.

All vertebrate animals’ ears contain tiny canals filled with fluid that helps us balance. The viscosity, or runniness, of that fluid changes based on temperature, and our inner ears have evolved different sizes so that it can flow correctly. Cold-blooded animals’ ear fluid is cooler and thicker, so it needs wider spaces to travel through, while warm-blooded animals have runnier ear fluid, so our semicircular canals don’t need to be as big.

“Until now, semicircular canals were generally used to predict locomotion of fossil organisms. However, by carefully looking at their biomechanics, we figured that we could also use them to infer body temperatures,” says Romain David, a post-doctoral researcher at the Natural History Museum and one of the study’s lead authors. “This is because, like honey, the fluid contained inside semicircular canals gets less viscous when temperature increases, impacting function. Hence, during the transition to endothermy, morphological adaptations were required to keep optimal performances, and we could track them in mammal ancestors.”

To track these evolutionary changes, the researchers compared the sizes of the inner ear canals of 341 animals, including 243 living species and 64 extinct ones. They found that mammal ancestors didn’t develop the kinds of inner ear structures ideal for warm-blooded animals until 233 million years ago-- nearly 20 million years later than scientists had previously thought warm-bloodedness evolved. And, based on when those differently-sized semicircular canals showed up in the fossil record, it seems that when mammal ancestors did evolve warm-bloodedness, it happened much more quickly than scientists had thought, around the same time that proto-mammals started to evolve whiskers, fur, and specialized backbones. The evolution of fur and warm-bloodedness at about the same time especially make sense because fur traps the body heat generated by a higher metabolism, helping keep the body at the high temperature it needs to thrive.

“Contrary to current scientific thinking, our paper surprisingly demonstrates that the acquisition of endothermy seems to have occurred very quickly in geological terms, in less than a million years,” says Ricardo Araújo, junior researcher at Instituto de Plasmas e Fusão Nuclear, Instituto Superior Técnico, University of Lisbon and one of the paper’s lead authors. “It was not a gradual, slow process over tens of millions of years as previously thought, but maybe was attained quickly when triggered by novel mammal-like metabolic pathways and origin of fur.”

The study’s senior author, Ken Angielczyk, says he’s excited by how the study helps answer one of the longest-standing questions about the evolution of mammals.

“The origin of mammalian endothermy is one of the great unsolved mysteries of paleontology. Many different approaches have been used to try to predict when it first evolved, but they have often given vague or conflicting results,” says Angielczyk, the Field Museum’s MacArthur Curator of Paleomammalogy. “We think our method shows real promise because it has been validated using a very large number of modern species, and it suggests that endothermy evolved at a time when many other features of the mammalian body plan were also falling into place.” 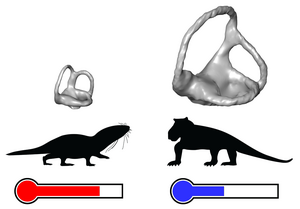