UNIVERSITY PARK, Pa. — Accurate, continuous monitoring of nitrogen dioxide and other gases in humid environments is now possible, thanks to a new water-resistant gas sensor developed by Huanyu “Larry” Cheng, the James L. Henderson Jr. Memorial Associate Professor of Engineering Science and Mechanics, and his team.

The sensor detects nitrogen dioxide in breath, the concentration of which may indicate potential pulmonary diseases, or in particular environments to monitor air quality. The team's approach was published in Microsystems & Nanoengineering.

While Cheng previously developed a sensor that was waterproof, that sensor could only detect temperature and motion. Cheng also has developed a highly customizable microscale gas sensor, as well as a flexible, porous and sensitive gas sensor. Humidity, sweat or other moisture exposure, however, rendered the sensors unusable.

“We cannot avoid humidity levels in the environment, which is why we wanted to emphasize the moisture-resistant property,” Cheng said.

The researchers used the same laser-induced graphene (LIG) — a speedy, cost-effective, environmentally friendly fabrication method that uses laser writing to assemble two-dimensional graphene layers — as they did for the previous gas sensors. This time, however, they also added a soft elastomeric polymer substrate and a moisture-resistant, semi-permeable membrane to either side of the LIG sensing layer.

“Laser-induced graphene is hydrophilic, so it intrinsically is a water-absorbing material,” Cheng said. “Water will naturally get down into the material and change its properties. If you have water molecules absorbed by the sensor, that will change the response. By using a semi-permeable membrane with the LIG, we can block the water or moisture from the outside but still allow the permeation of the target gas molecule. Since the new material is stretchable and soft, it can be worn on the skin for a long time without causing irritation.”

To test the sensors, the researchers used them to evaluate the breath of 30 individuals. They found that the sensor response values were more than four times greater for patients who had chronic obstructive pulmonary disease (COPD) or asthma than for those who did not, meaning that people with COPD or asthma had more than four times the amount of nitrogen dioxide in their exhalation.

“With this sensor, we are much closer to the actual application of helping a patient,” said co-author Li Yang, associate professor in the School of Health Sciences and Biomedical Engineering at Hebei University of Technology. “This sensor could be used for the early screening process, to make someone aware of the potential condition that may develop into a bigger concern later, and also for the existing COPD or asthma patient to monitor the environment for potential exposure to nitrogen dioxide so they can take early prevention measures, like avoiding certain areas with higher nitrogen dioxide levels.”

Cheng said that eventually this sensor could be used for monitoring not only individual well-being but also to better understand the health of a population.

“This could be used for a large-scale study to provide information that was previously inaccessible with the other type of sensor devices, which is something I’m excited about,” he said. 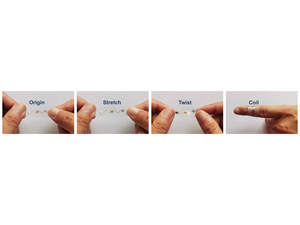