Embargoed until Tuesday, November 15 at 6AM (Israel time)

The remains of a huge carp fish (2 meters/6.5 feet length), analyzed by the Hebrew University, Bar-Ilan University Tel Aviv University, in collaboration with Oranim Academic College, the Israel Oceanographic and Limnological Research institution, the Natural History Museum in London, and the Johannes Gutenberg University in Mainz, mark the earliest signs of cooking by prehistoric human to 780,000 years ago, predating the available data by some 600,000 years.

A remarkable scientific discovery has been made by researchers from the Hebrew University of Jerusalem (HU), Tel Aviv University (TAU), and Bar-Ilan University (BIU), in collaboration with the Steinhardt Museum of Natural History, Oranim Academic College, the Israel Oceanographic and Limnological Research (IOLR) institution, the Natural History Museum in London, and the Johannes Gutenberg University in Mainz. A close analysis of the remains of a carp-like fish found at the Gesher Benot Ya’aqov (GBY) archaeological site in Israel shows that the fish were cooked roughly 780,000 years ago.  Cooking is defined as the ability to process food by controlling the temperature at which it is heated and includes a wide range of methods. Until now, the earliest evidence of cooking dates to approximately 170,000 years ago. The question of when early man began using fire to cook food has been the subject of much scientific discussion for over a century. These findings shed new light on the matter and was published in Nature Ecology and Evolution.

The study was led by a team of researchers:  Dr. Irit Zohar, a researcher at TAU’s Steinhardt Museum of Natural History and curator of the Beit Margolin Biological Collections at Oranim Academic College, and HU Professor Naama Goren-Inbar, director of the excavation site.  The research team also included Dr. Marion Prevost at HU’s Institute of Archaeology; Prof. Nira Alperson-Afil at BIU’s Department for Israel Studies and Archaeology; Dr. Jens Najorka of the Natural History Museum in London; Dr. Guy Sisma-Ventura of the Israel Oceanographic and Limnological Research Institute; Prof. Thomas Tütken of the Johannes Gutenberg University in Mainz and Prof. Israel Hershkovitz at TAU’s Faculty of Medicine.

Dr. Zohar and Dr. Prevost: “This study demonstrates the huge importance of fish in the life of prehistoric humans, for their diet and economic stability. Further, by studying the fish remains found at Gesher Benot Ya’aqob we were able to reconstruct, for the first time, the fish population of the ancient Hula Lake and to show that the lake held fish species that became extinct over time. These species included giant barbs (carp like fish) that reached up to 2 meters in length. The large quantity of fish remains found at the site proves their frequent consumption by early humans, who developed special cooking techniques. These new findings demonstrate not only the importance of freshwater habitats and the fish they contained for the sustenance of prehistoric man, but also illustrate prehistoric humans’ ability to control fire in order to cook food, and their understanding the benefits of cooking fish before eating it.”

In the study, the researchers focused on pharyngeal teeth (used to grind up hard food such as shells) belonging to fish from the carp family. These teeth were found in large quantities at different archaeological strata at the site. By studying the structure of the crystals that form the teeth enamel (whose size increases through exposure to heat), the researchers were able to prove that the fish caught at the ancient Hula Lake, adjacent to the site, were exposed to temperatures suitable for cooking, and were not simply burned by a spontaneous fire.

Until now, evidence of the use of fire for cooking had been limited to sites that came into use much later than the GBY site--by some 600,000 years, and ones most are associated with the emergence of our own species, homo sapiens.

Prof. Goren-Inbar added: “The fact that the cooking of fish is evident over such a long and unbroken period of settlement at the site indicates a continuous tradition of cooking food. This is another in a series of discoveries relating to the high cognitive capabilities of the Acheulian hunter-gatherers who were active in the ancient Hula Valley region. These groups were deeply familiar with their environment and the various resources it offered them.  Further, it shows they had extensive knowledge of the life cycles of different plant and animal species. Gaining the skill required to cook food marks a significant evolutionary advance, as it provided an additional means for making optimal use of available food resources. It is even possible that cooking was not limited to fish, but also included various types of animals and plants.”

Prof. Hershkovitz and Dr. Zohar note that the transition from eating raw food to eating cooked food had dramatic implications for human development and behavior.  Eating cooked food reduces the bodily energy required to break down and digest food, allowing other physical systems to develop.  It also leads to changes in the structure of the human jaw and skull. This change freed humans from the daily, intensive work of searching for and digesting raw food, providing them free time in which to develop new social and behavioral systems. Some scientists view eating fish as a milestone in the quantum leap in human cognitive evolution, providing a central catalyst for the development of the human brain.  They claim that eating fish is what made us human. Even today, it is widely known that the contents of fish flesh, such as omega-3 fatty acids, zinc, iodine and more, contribute greatly to brain development.

The research team believe that the location of freshwater areas, some of them in areas that have long since dried up and become arid deserts, determined the route of the migration of early man from Africa to the Levant and beyond. Not only did these habitats provide drinking water and attracted animals to the area but catching fish in shallow water is a relatively simple and safe task with a very high nutritional reward.

The team posits that exploiting fish in freshwater habitats was the first step on prehistoric humans’ route out of Africa. Early man began to eat fish around 2 million years ago but cooking fish—as found in this study—represented a real revolution in the Acheulian diet and is an important foundation for understanding the relationship between man, the environment, climate, and migration when attempting to reconstruct the history of early humans.

It should be noted that evidence of the use of fire at the site—the oldest such evidence in Eurasia—was identified first by BIU’s Prof. Nira Alperson-Afil. “The use of fire is a behavior that characterizes the entire continuum of settlement at the site,” she explained. “This affected the spatial organization of the site and the activity conducted there, which revolved around fireplaces.” Alperson-Afil’s research of fire at the site was revolutionary for its time and showed that the use of fire began hundreds of thousands of years before previously thought.

HU’s Goren-Inbar added that the archaeological site of GBY documents a continuum of repeated settlement by groups of hunter-gatherers on the shores of the ancient Hula Lake which lasting tens of thousands of years. “These groups made use of the rich array of resources provided by the ancient Hula Valley and left behind a long settlement continuum with over 20 settlement strata,” Goren-Inbar explained. The excavations at the site have uncovered the material culture of these ancient hominins, including flint, basalt, and limestone tools, as well as their food sources, which were characterized by a rich diversity of plant species from the lake and its shores (including fruit, nuts, and seeds) and by many species of land mammals, both medium-sized and large.

Dr. Jens Najorka of the Natural History Museum in London explained: “In this study, we used geochemical methods to identify changes in the size of the tooth enamel crystals, as a result of exposure to different cooking temperatures. When they are burnt by fire, it is easy to identify the dramatic change in the size of the enamel crystals, but it is more difficult to identify the changes caused by cooking at temperatures between 200 and 500 degrees Celsius. The experiments I conducted with Dr. Zohar allowed us to identify the changes caused by cooking at low temperatures. We do not know exactly how the fish were cooked but given the lack of evidence of exposure to high temperatures, it is clear that they were not cooked directly in fire, and were not thrown into a fire as waste or as material for burning.”

Dr. Guy Sisma-Ventura of the Israel Oceanographic and Limnological Research Institute and Prof. Thomas Tütken of the Johannes Gutenberg University Mainz were also part of the research group, providing analysis of the isotope composition of oxygen and carbon in the enamel of the fishes’ teeth. “This study of isotopes is a real breakthrough, as it allowed us to reconstruct the hydrological conditions in this ancient lake throughout the seasons, and thus to determine that the fish were not a seasonal economic resource but were caught and eaten all year round. Thus, fish provided a constant source of nutrition that reduced the need for seasonal migration.”

Link to all images: 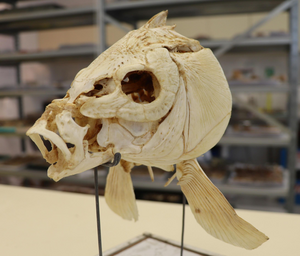 An example of a skull of modern carp 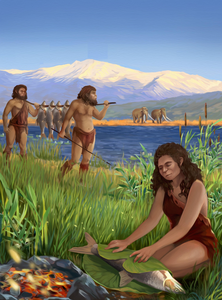 An illustration of hominins exploiting and cooking Luciobarbus longiceps (large barb, Cyprinidae) on the shores of paleo Lake Hula (illustration by Ella Maru) 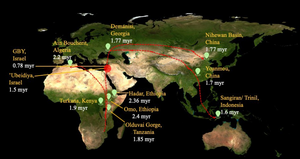 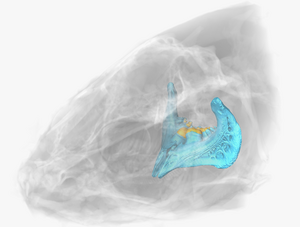 3D reconstruction of skull, demonstrating the location of the pharyngeal bone and teeth