Tropical forests are crucial for sucking up carbon dioxide from the atmosphere. But they’re also subject to intense storms that can cause “windthrow” – the uprooting or breaking of trees. These downed trees decompose, potentially turning a forest from a carbon sink into a carbon source.

A new study finds that more extreme thunderstorms from climate change will likely cause a greater number of large windthrow events in the Amazon rainforest. This is one of the few ways that researchers have developed a link between storm conditions in the atmosphere and forest mortality on land, helping fill a major gap in models.

“Building this link between atmospheric dynamics and damage at the surface is very important across the board,” said Jeff Chambers, a senior faculty scientist at the Department of Energy’s Lawrence Berkeley National Laboratory (Berkeley Lab), and director of the Next Generation Ecosystem Experiments (NGEE)-Tropics project, which performed the research. “It’s not just for the tropics. It’s high-latitude, low-latitude, temperate-latitude, here in the U.S.”

Researchers found that the Amazon will likely experience 43% more large blowdown events (of 25,000 square meters or more) by the end of the century. The area of the Amazon likely to see extreme storms that trigger large windthrows will also increase by about 50%. The study was published in the journal Nature Communications on Jan. 6.

“We want to know what these extreme storms and windthrows mean in terms of the carbon budget and carbon dynamics, and for carbon sinks in the forests,” Chambers said. While downed trees slowly release carbon as they decompose, the open forest becomes host to new plants that pull carbon dioxide from the air. “It’s a complicated system, and there are still a lot of pieces of the puzzle that we’re working on. In order to answer the question more quantitatively, we need to build out the land-atmosphere links in Earth system models.”

To find the link between air and land, researchers compared a map of more than 1,000 large windthrows with atmospheric data. They found that a measurement known as CAPE, the “convective available potential energy,” was a good predictor of major blowdowns. CAPE measures the amount of energy available to move parcels of air vertically, and a high value of CAPE often leads to thunderstorms. More extreme storms can come with intense vertical winds, heavy rains or hail, and lightning, which interact with trees from the canopy down to the soil.

“Storms account for over half of the forest mortality in the Amazon,” said Yanlei Feng, first author on the paper. “Climate change has a lot of impact on Amazon forests, but so far, a large fraction of the research focus has been on drought and fire. We hope our research brings more attention to extreme storms and improves our models to work under a changing environment from climate change.”

While this study looked at a future with high carbon emissions (a scenario known as SSP-585), scientists could use projected CAPE data to explore windthrow impacts in different emissions scenarios. Researchers are now working to integrate the new forest-storm relationship into Earth system models. Better models will help scientists explore how forests will respond to a warmer future – and whether they can continue to siphon carbon out of the atmosphere or will instead become a contributor.

“This was a very impactful climate change study for me,” said Feng, who completed the research as a graduate student researcher in the NGEE-Tropics project at Berkeley Lab. She now studies carbon capture and storage at the Carnegie Institution for Science at Stanford University. “I’m worried about the projected increase in forest disturbances in our study and I hope I can help limit climate change. So now I’m working on climate change solutions.”

NGEE-Tropics is a ten-year, multi-institutional project funded by the U.S. Department of Energy’s Office of Science, Office of Biological and Environmental Research. 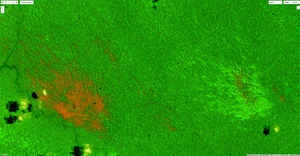 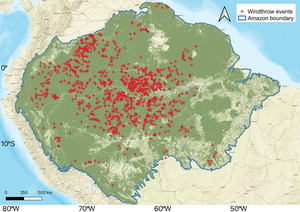