Sound waves reveal the unique properties of an ultracold quantum gas, a model system for describing certain superconductors and forms of nuclear matter. A new Australian study examines the propagation of energy as sound waves in a quantum gas, revealing for the first time strong variations in the nature of the sound wave as a function of temperature.

At low energies, this energy travels via the collective movement of many particles moving in sync - essentially, as sound waves -quantified using quasiparticles known as phonons.

Below the superfluid transition temperature Tc these sound waves in a unitary Fermi gas can propagate without collisions and are driven by ripples in the phase of the superfluid order parameter (wave-function)--this mode is known as the Bogoliubov-Anderson (BA) phonon.

Strong similarities were identified in the temperature dependence of sound in the unitary Fermi gas and the behaviour of phonons in liquid helium, which was one of the first superfluids identified historically.

MORE ABOUT THE STUDY

"We cooled and confined a highly dilute gas of Li6 atoms, realising a unitary Fermi gas, which exhibits the strongest interactions allowed by quantum mechanics with a contact potential," explains Prof Vale.

In a unitary gas, elastic collisions become resonant and the thermodynamic properties of the gas become universal functions of the temperature and density. Unitary Fermi gases allow precise testing of theories of interacting fermions.

The team then studied excitations in the gas above and below the superfluid phase transition Tc using two-photon Bragg spectroscopy.

"We measured excitation spectra at a momentum of approximately half the Fermi momentum, both above and below the superfluid critical temperature Tc," explains study author Dr Carlos Kuhn.

Two, focused laser pulses (approx 1.2 milliseconds in duration) intersecting within the gas create a periodic perturbation for the lithium atoms.

Immediately after the twin laser pulse, the confining optical trap is swiTched off and the momentum of atoms is measured after 4 milliseconds of expansion, and can be mapped as a function of laser frequency.

The finite duration and size of the Bragg beams lead to a Fourier-limited spectral resolution of approximately 1:25 kHz FWHM which is well below the typical Fermi energies, EF 11 kHz, used in the experiments.

As well as support from the Australian Research Council the authors thank M. Zwierlein, Y. Castin and H. Hu for stimulating discussions and J. Denier for assistance on initial experiments, and acknowledge financial support from the Independent Research Fund of Denmark. 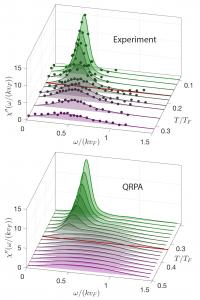