Spanish and French researchers have defined the age, location, size and geochemistry of the volcanoes of Gran Canaria during the Holocene, 11,000 years ago, in order to draw up a map of volcanic hazards for the island. The research shows that the area of greatest volcanic activity is one of the most heavily populated areas in the north east of the island, which has suffered 24 eruptions over the period studied.

The team of French and Spanish scientists led by researchers from the University of Las Palmas de Gran Canaria (ULPGC) and the "Jaume Almera" Institute of Earth Sciences (CSIC, Barcelona) combined the data from previous studies with the results of analysis of 13 new radiocarbon ages in order to gain an understanding of the history of the island and predict the areas to be struck by future volcanic eruptions.

The result, which has been published recently in the Journal of Quaternary Science, is a map of volcanic hazards for Gran Canaria, describing risk scenarios. "We have identified 24 volcanic eruptions that took place over the past 11,000 years on Gran Canaria. We know that volcanism was concentrated in the northern sector of the island and produced small monogenetic strombolian cones (eruptions that are not very violent and which release lava and pyroclastic flows) and, occasionally, phreatomagmatic calderas (which release ash), Alejandro Rodríguez-González, lead author of the study and a researcher at the ULPGC, tells SINC.

In order to create the map, the researchers based themselves on detailed field work, which enabled them to define the limits of the various volcanic units (cone, lava and horizontal spread of pyroclastic flows) with a great degree of exactitude, using geomorphologiccal and stratigraphic criteria.

The data now made available by the scientists makes it possible to better evaluate the scale and type of future eruptions in this area. By working out the areas, before and after, of each eruption using Digital Land Models (DLM), the researchers have developed a novel and very detailed morphometric methodology for this kind of volcanic environment.

The study started with palaeotopographical reconstructions of areas affected by recent volcanic activity. "This allows our methodology to show geomorphological changes according to volcanic type and the periods of erosion involved", explains Rodríguez-González.

North of the island faces greatest risk of eruption

The volcanologists expect that the next volcanic eruption on the island will be of the "strombolian monogenetic type", producing a cone of between 30 and 250 metres in height and a lava flow of between 100 and 10,000 metres in length.

One of the most heavily populated areas in the north east of the island has experienced the highest level of volcanic activity over the past 11,000 years, and it is therefore likely that this volcanic activity will continue in future. However, it is impossible to predict when such an eruption will take place. "While it is possible to determine where there is the greatest future danger, our current understanding of volcanic phenomena does not allow us to predict when an eruption will take place", explains Rodríguez-González.

The new results highlight the fact that there were three groups of volcanic activity during the Holocene "separated by four periods of inactivity". The first of these took place more than 10,000 years ago, with the single eruption at El Draguillo, to the east of the island. The other series of eruptions took place between 5,700 and 6,000 years ago, and between 1,900 and 3,200 years ago. Archaeological studies show that the most recent period of eruptions affected prehistoric human settlements on the island.

However, the researchers say that currently "the number of eruptive centres is on the increase, and periods of volcanic inactivity are getting shorter". They also warn that over the past 11,000 years "the amount of magma released has increased, as has the explosivity of eruptions". 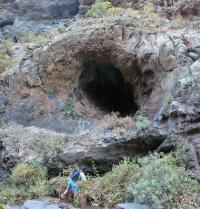