The idea that the young Earth had a thicker atmosphere turns out to be wrong. New research from the University of Washington uses bubbles trapped in 2.7 billion-year-old rocks to show that air at that time exerted at most half the pressure of today's atmosphere.

The results, published online May 9 in Nature Geoscience, reverse the commonly accepted idea that the early Earth had a thicker atmosphere to compensate for weaker sunlight. The finding also has implications for which gases were in that atmosphere, and how biology and climate worked on the early planet.

"For the longest time, people have been thinking the atmospheric pressure might have been higher back then, because the sun was fainter," said lead author Sanjoy Som, who did the work as part of his UW doctorate in Earth and space sciences. "Our result is the opposite of what we were expecting."

The idea of using bubbles trapped in cooling lava as a "paleobarometer" to determine the weight of air in our planet's youth occurred decades ago to co-author Roger Buick, a UW professor of Earth and space sciences. Others had used the technique to measure the elevation of lavas a few million years old. To flip the idea and measure air pressure farther back in time, researchers needed a site where truly ancient lava had undisputedly formed at sea level.

Their field site in Western Australia was discovered by co-author Tim Blake of the University of Western Australia. There, the Beasley River has exposed 2.7 billion-year-old basalt lava. The lowest lava flow has "lava toes" that burrow into glassy shards, proving that molten lava plunged into seawater. The team drilled into the overlying lava flows to examine the size of the bubbles.

A stream of molten rock quickly cools from top and bottom, and bubbles trapped at the bottom are smaller than those at the top. The size difference records the air pressure pushing down on the lava as it cooled, 2.7 billion years ago.

Rough measurements in the field suggested a surprisingly lightweight atmosphere. More rigorous x-ray scans from several lava flows confirmed the result: The bubbles indicate that the atmospheric pressure at that time was less than half of today's.

Earth 2.7 billion years ago was home only to single-celled microbes, sunlight was about one-fifth weaker, and the atmosphere contained no oxygen. But this finding points to conditions being even more otherworldly than previously thought. A lighter atmosphere could affect wind strength and other climate patterns, and would even alter the boiling point of liquids.

"We're still coming to grips with the magnitude of this," Buick said. "It's going to take us a while to digest all the possible consequences." Other geological evidence clearly shows liquid water on Earth at that time, so the early atmosphere must have contained more heat-trapping greenhouse gases, like methane and carbon dioxide, and less nitrogen.

The new study is an advance on the UW team's previous work on "fossilized raindrops" that first cast doubt on the idea of a far thicker ancient atmosphere. The result also reinforces Buick's 2015 finding that microbes were pulling nitrogen out of Earth's atmosphere some 3 billion years ago.

"The levels of nitrogen gas have varied through Earth's history, at least in Earth's early history, in ways that people just haven't even thought of before," said co-author David Catling, a UW professor of Earth and space sciences. "People will need to rewrite the textbooks."

The researchers will next look for other suitable rocks to confirm the findings and learn how atmospheric pressure might have varied through time.

While clues to the early Earth are scarce, it is still easier to study than planets outside our solar system, so this will help understand possible conditions and life on other planets where atmospheres might be thin and oxygen-free, like that of the early Earth.

Early Earth's air weighed less than half of today's atmosphere 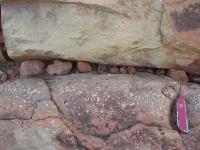