A team of physicists at the Okinawa Institute of Science and Technology Graduate University (OIST) has predicted the existence of a new kind of spin liquid. A spin liquid is an exotic phenomenon that intrigues scientists: it is a magnetic material in which the magnetism of the atoms fluctuates continuously between different directions. Their theoretical discovery found confirmation through computer simulation. Notably, this mathematical description of a spin liquid shares important similarities with a gauge symmetry, which is a key element in the way physics describes the world. The researchers, all from OIST Theory of Quantum Matter Unit, published their results in Nature Communications.

Spin liquids are well known to physicists. The name 'spin liquid' is misleading, as a spin liquid is a solid that is liquid only from the point of view of the directions of its atoms' magnetism. The direction of an atom's magnetism is defined by the magnetism that originates from the rotation of the electrons around the atom's nucleus. In a visual representation of an atom, the magnetism's direction can be drawn as an arrow, which points in a specific direction of space.

At high temperature, the arrows inside a given material typically point in random directions: the magnetism of each atom is different. When the material is cooled down, the arrows usually arrange themselves in a repeating pattern. A spin liquid is a specific type of magnetic material in which the atoms' directions keep fluctuating even at low temperatures.

Spin liquids are hard to pin down because they lack the regular repeating patterns of other magnets. Being able to predict the existence of a new kind of spin liquid is then a very important achievement. The new spin liquid theoretically discovered by the scientists is characterized by a unique internal structure describing how the magnetism of each atom relates to the magnetism of those around it.

The finding is significant because there is a strong relationship between the scientists' mathematical description of the spin liquid and a gauge symmetry. Gauge symmetries are the way in which physicists understand the fundamental forces of nature, such as electromagnetism. Finding gauge symmetries in spin liquids is interesting because it reveals deep connections between different branches of physics. These connections have historically fostered new understandings of how we interpret reality from the physicists' point of view.

The research is particularly exciting because it also predicts how this distinctive spin liquid can be identified in experiments. After confirming their finding via computer simulation, the researchers have predicted that it should be possible to corroborate the existence of this spin liquid through a neutron scattering experiment. Firing a beam of neutrons at a material creates a 3D map of how the neutrons scatter after hitting the substance, through sensors placed all around the material. If the scientists' hypothesis is correct, they would expect the appearance of special features called 'pinch lines' in the map of specific materials, known as pyrochlore materials. The pinch line can be thought of as an unusual shape that looks like a series of bow-ties stacked on top of each other.

The researchers already have a good idea for a material in which this spin liquid could be found. Computer simulations of neutron scattering experiments for this spin liquid bear a striking resemblance to previous experimental results on the magnetic material Tb2Ti2O7. It will be exciting to see if pinch lines can be observed in this material, to reveal this strange spin-liquid state.

Even if it takes a while before it is possible to experimentally confirm these findings, the research has the potential to foster many new discoveries. "Researching and understanding what happens when many atoms interact together often leads to unpredictable discoveries, like the development of transistors and lasers," Owen Benton, first author of the paper, commented. "So, as we understand reality around us, we open up new possibilities for innovation."

A new spin on reality 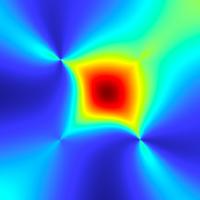 Graphic Adaptation of a Simulation of a Neutron Scattering Experiment

Members of the OIST Theory of Quantum Matter Unit