NASA's infrared satellite imagery has confirmed that Tomas is intensifying as convection is strengthening and cloud tops within the system are getting colder.

Infrared imagery helps scientists detect cold top temperatures within a tropical cyclone, and Tomas' cloud tops have grown colder over the last 24 hours. Tomas showed strong convective activity in his center as indicated by high thunderstorms that were as cold as -63 degrees Fahrenheit. The colder the cloud tops, the higher and stronger the thunderstorms are that power the tropical cyclone. The infrared imagery was captured on Nov. 4 at 0659 UTC (2:59 a.m. EDT) by the Atmospheric Infrared Sounder (AIRS) instrument that flies aboard NASA's Aqua satellite.

At 8 a.m. EDT on Nov. 4 Tomas had maximum sustained winds near 50 mph, and further strengthening is expected as wind shear remains light and sea surface temperatures remain warm. Tomas was located about 150 miles south-southeast of Kingston, Jamaica and 305 miles southwest of Port Au Prince, Haiti near 15.9 North and 76.0 West. It was moving north-northwest near 6 mph, and had a minimum central pressure of 998 millibars.

A tropical storm warning is in effect for Jamaica as Tomas nears. Tropical Storm conditions are expected within 24 to 36 hours of the warning area. The warning was posted at 8 a.m. EDT on Nov. 4. Tropical storm warnings are also in effect for the south coast of the Dominican Republic from the Haiti border east to Barahona, and in Cuba, for the provinces of Guantanamo, Santiago de Cuba and Holguin.

Hurricane warnings are now in effect for Haiti, southeastern Bahamas and the Turks and Caicos Islands.

The National Hurricane Center (NHC) in Miami, Fla. is expecting very heavy rainfall amounts with Tomas. NHC stated that "Haiti and the Dominican Republic can expect 5 to 10 inches of rain, locally up to 15 inches. Jamaica may get 1 to 3 inches of rain. These rains could cause life-threatening flashfloods or mudslides. The Turks and Caicos Islands and the Bahamas could see 3 to 6 inches."

In addition to the heavy rainfall, storm surges between 1 to 3 feet above normal tide levels can be expected in the warning area in areas of onshore flow.

Tropical Storm Tomas continues to track north-northwest toward the Windward Passage and eastern Hispaniola. Satellite imagery shows that scattered showers and thunderstorms that are associated with Tropical Storm Tomas are in the area between 15 and 19 degrees North and 67 to 79 West, covering a large area.

AIRS infrared satellite imagery showed a second area of showers and thunderstorms with strong convection, located to the southwest of Tomas. Computer models indicate that those showers are associated with a monsoon trough, or an elongated area of low pressure. That trough stretches a long distance from southwest of Tomas near 13 North and 78 West, west to Costa Rica and into the eastern Pacific Ocean.

A low- to mid-level ridge of high pressure (an elongated area of high pressure) is sitting over the western central Atlantic Ocean today is steering Tomas to the north-northwest and then north as it moves around the edge of the high. The high acts as a wall that Tomas can't break through, so it circles the high's perimeter. 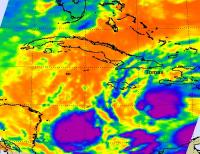