New Zealand's largest fault is a jumble of mixed-up rocks of all shapes, sizes, compositions and origins. According to research from a global team of scientists, this motley mixture could help explain why the fault generates slow-motion earthquakes known as "slow slip events" as well as destructive, tsunami-generating tremors.

"One thing that really surprised us was the sheer diversity of rock types," said Laura Wallace, a research scientist at the University of Texas Institute for Geophysics (UTIG) and co-chief scientist on the expedition that retrieved rock samples from the fault. "These rocks that are being mashed up together all behave very differently in terms of their earthquake generating potential."

The finding was described in a paper published March 25, 2020, in Science Advances. It is the latest discovery to emerge from two scientific drilling expeditions in New Zealand led by scientists at The University of Texas at Austin and colleagues at institutions in New Zealand.

Subduction zones--places where one tectonic plate dives beneath another--are where the world's largest and most damaging earthquakes occur. Scientists have long debated why quakes are more powerful or more frequent at some subduction zones than at others, and whether there may be a connection with the slow slip events, which can take weeks or months to unfold. Although they are not felt by people on the surface, the energy they release into the Earth is comparable to powerful earthquakes.

"It has become apparent only in the last few years that slow slip events happen at many different types of faults, and some at depths in the Earth much shallower than previously thought," said the paper's lead author, Philip Barnes of the New Zealand Institute for Water and Atmospheric Research (NIWA). "It's raised a lot of big questions about why they happen, and how they affect other kinds of earthquakes."

To answer these questions, Barnes, Wallace, and UTIG Director Demian Saffer led two scientific ocean drilling expeditions to a region off the coast of New Zealand, where they drilled into and recovered rocks from the vicinity of the tremors' source. UTIG is a research unit of the UT Jackson School of Geosciences.

"The earthquake and geological science community has speculated about what goes into a subduction zone where slow earthquakes occur," said Saffer, who was co-chief scientist on the second expedition. "But this was the first time we've literally held those rocks--and physical evidence for any of those ideas--in our hands."

The team drilled into the remains of a buried, ancient sea mountain where they found pieces of volcanic rock, hard, chalky, carbonate rocks, clay-like mudrocks, and layers of sediments eroded from the mountain's surface.

Kelin Wang, an expert in earthquake physics and slow slip events at the Geological Survey of Canada, said that the paper was effectively a breakthrough in understanding how the same fault can generate different types of earthquakes.

"In addition to helping us understand the geology of slow slip events this paper also helps explain how the same fault can exhibit complex slip behavior, including tsunami-generating earthquakes," said Wang, who was not part of the study.

Efforts to understand the connection between slow slip events and more destructive earthquakes are already underway. These studies, which are being led by other UTIG researchers, include detailed seismic imaging--which is similar to a geological CAT scan--of the slow slip zone in New Zealand, and an ongoing effort to track the behavior of subduction zones around the world by installing sensors on and beneath the seafloor. The goal of the work is to develop a better understanding of the events that lead up to a slow slip event versus a tsunami-generating earthquake.

"The next needed steps are to continue installing offshore instruments at subduction zones in New Zealand and elsewhere so we can closely monitor these large offshore faults, ultimately helping communities to be better prepared for future earthquakes and tsunami," said Wallace, who also works at GNS Science, New Zealand's government-funded geosciences research institute.

The research was supported by the International Ocean Discovery Program which is sponsored by the National Science Foundation and other participating countries. Support for the research also came from New Zealand's Ministry for Business, Innovation, and Employment, NIWA and GNS Science. 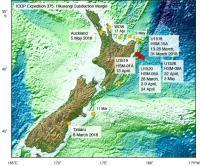 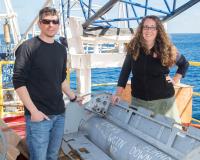