From the late Bronze Age until the Middle Ages, the eastern Eurasian Steppe was home to a series of organized and highly influential nomadic empires. The Xiongnu (209 BCE - 98 CE) and Mongol (1206-1368 CE) empires that bookend this period had especially large impacts on the demographics and geopolitics of Eurasia, but due to a lack of large-scale genetic studies, the origins, interactions, and relationships of the people who formed these states remains largely unknown.

To understand the population dynamics that gave rise to the Steppe's historic empires, researchers from the Max Planck Institute for the Science of Human History (MPI-SHH), the National University of Mongolia, and partner institutions in Mongolia, Russia, Korea and the United States generated and analyzed genome-wide data for 214 individuals from 85 Mongolian and 3 Russian sites. Spanning the period of 4600 BCE to 1400 CE, it is among the largest studies of ancient Eastern and Inner Asian genomes to date.

During the mid-Holocene, the eastern Eurasian Steppe was populated by hunter-gatherers of Ancient Northeast Asian (ANA) and Ancient Northern Eurasian (ANE) ancestry, but around 3000 BCE, dairy pastoralism was introduced through the expansion of the Afanasievo culture of the Altai mountains, whose origins can be traced to the Yamnaya steppe herders of the Black Sea region more than 3,000 km to the west. Although these migrants left little genetic impact, they had an outsized cultural effect and by the Mid- to Late Bronze Age, dairy pastoralism was practiced by populations throughout the Eastern Steppe.

In the Late Bronze Age and Early Iron Age, populations in west, north and south-central Mongolia formed three distinct, geographically structured gene pools. These populations remained discrete for more than a millennium, until increased mobility, likely facilitated by the rise of horseback riding, began to break down this structure. The formation of the Xiongnu in north-central Mongolia, the first nomadic empire in Asia, is contemporaneous with this population mixture and with the influx of new gene pools originating from across Eurasia, from the Black Sea to China.

"Rather than a simple genetic turnover or replacement, the rise of the Xiongnu is linked to the sudden mixture of distinct populations that had been genetically separated for millennia. As a result, the Xiongnu of Mongolia show a spectacular level of genetic diversity that reflects much of Eurasia," says Dr. Choongwon Jeong, lead author of the study and a professor of Biological Sciences at Seoul National University.

A thousand years later, individuals from the Mongol Empire, one of largest contiguous empires in history, showed a marked increase in Eastern Eurasian ancestry compared to individuals from the earlier Xiongnu, Turkic and Uyghur periods, accompanied by a near complete loss of the ancient ANE ancestry that had been present since before the Xiongnu Empire. By the end of the Mongol Empire, the genetic makeup of the Eastern Steppe had changed dramatically, ultimately stabilizing into the genetic profile observed among present-day Mongolians.

"Our study of ancient Mongolia reveals not only early genetic contributions from populations on the Western Steppe, but also a marked genetic shift towards eastern Eurasian ancestry during the Mongol Empire. The region has a remarkably dynamic genetic history, and ancient DNA is beginning to reveal the complexity of population events that have shaped the Eurasian Steppe," says Ke Wang, co-first author of the study and a PhD student at the MPI-SHH.

In addition to the impacts of genetic events on political structures, the researchers also investigated the relationship between genetics and subsistence strategies. Despite more than 5,000 years of dairy pastoralism in the region and the continued importance of dairy in the average Mongolian diet today, researchers found no evidence for the selection of lactase persistence, a genetic trait that allows lactose digestion.

"The absence of lactase persistence in Mongolian populations both today and in the past challenges current medical models of lactose intolerance, and suggests a much more complicated prehistory of dairying. We are now turning to the gut microbiome to understand how populations adapt to dairy-based diets," says Dr. Christina Warinner, senior author of the study, a professor of Anthropology at Harvard University and a research group leader at the MPI-SHH.

"Reconstructing a 6,000-year genetic history of Mongolia has had a transformative effect on our understanding of the archaeology of the region. While answering some long-standing questions, it has also generated new questions and revealed several surprises. We hope that this research will energize future work on the rich and complex relationships between ancestry, culture, technology, and politics in the rise of Asia's nomadic empires," adds Dr. Erdene Myagmar, co-senior author of the study and professor of Anthropology and Archaeology at the National University of Mongolia.

Population dynamics and the rise of empires in Inner Asia 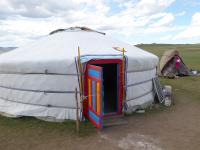