HOUSTON - (Oct. 20, 2016) - Scientists at Rice University are smashing metallic micro-cubes to make them ultrastrong and tough by rearranging their nanostructures upon impact.

The Rice team reported in Science this week that firing a tiny, nearly perfect cube of silver onto a hard target turns its single-crystal microstructure into a gradient-nano-grained (GNG) structure.

The purpose of the experiment was to learn how materials deform under overwhelming stress, as might be experienced by a bulletproof vest or a spacecraft that encounters micrometeorites. The researchers believe creating a gradient nanostructure in materials by way of deformation will make them more ductile and therefore less likely to fail catastrophically when subsequently stressed.

Ultimately, they want to develop nano-grained metals that are tougher and stronger than anything available today.

Led by materials scientist Edwin Thomas, the William and Stephanie Sick Dean of Rice's George R. Brown School of Engineering, the team used its advanced laser-induced projectile impact test (LIPIT) rig to shoot microcubes onto a silicon target. The mechanism allowed them to be sure the cube hit the target squarely.

The Thomas lab developed the LIPIT technique several years ago to fire microbullets to test the strength of polymer and graphene film materials. This time the researchers were essentially testing the bullet itself.

"The high-velocity impact generates very high pressure that far exceeds the material's strength," Thomas said. "This leads to high plasticity at the impact side of the cube while the top region retains its initial structure, ultimately creating a grain-size gradient along its height."

The original projectiles needed to be as perfect as possible. That required a custom fabrication method, Thomas said. The cubes for the study were synthesized as single crystals via bottom-up seed growth to about 1.4 microns per side, about 50 times smaller than the width of a human hair.

LIPIT transformed laser power into the mechanical energy that propelled the cubes toward a target at supersonic velocity. The cubes were placed on top of a thin polymer film that thermally isolated them and prevented the laser itself from deforming them. When a laser pulse hit an absorbing thin-film gold layer underneath the polymer, the laser energy caused it to vaporize. That expanded the polymer film, which launched the microcubes.

The distance covered was small -- about 500 micrometers -- but the effect was large. While the experiments were carried out at room temperature, the cube's temperature rose by about 350 degrees Fahrenheit upon impact at 400 meters per second and allowed dynamic recrystallization.

The team fired silver cubes at the target at various orientations and measured the results of the impact from every angle, inside and out and from the nanoscale on up. Controlling the orientation of the crystal's impact gave them enormous ability to control the resulting structure and potentially its mechanical properties, Thomas said.

Other industrial processes produce materials with grains that can range from the nanocrystalline up to the coarse-grained, and, Thomas said, neither structure is ideal. While nanocrystalline structures make metals stronger, they also increase their susceptibility to catastrophic brittle failure due to the way those grains localize strain. Studies have demonstrated that creating a gradient-nano-grained structure from the nanometer to the micron scale may provide high strength yet alleviate such brittle failures by better distribution of stress.

The one-step Rice process makes such structures with a range of grains from about 10 to 500 nanometers over a distance of 500 nanometers. That produces a gradient at least 10 times higher than the other techniques, the researchers reported.

They also discovered the impact stores considerable elastic energy in the material, which leads to slow but continuous recrystallization of the metal at room temperature, even though silver's melting point is more than 1,700 degrees Fahrenheit. Electron microscope analysis of samples eight days after impact showed the crystals were still seeking equilibrium, Thomas said.

In addition to promising pathways for creating ultrastrong and tough metals, the researchers believe their work may influence such other modern material processing techniques as cold spray and shot peening.

Rice postdoctoral researcher Ramathasan Thevamaran is lead author of the paper. Co-authors are Rice graduate student Olawale Lawal and research scientist Sadegh Yazdi and Rice alumni Seog-Jin Jeon, a postdoctoral researcher, and Jae-Hwang Lee, an assistant professor of mechanical and industrial engineering, both at the University of Massachusetts, Amherst.

Read the abstract at

This news release can be found online at http://news.rice.edu/2016/10/20/smashing-metallic-cubes-toughens-them-up/

Microscopic silver cubes were the bullets in Rice University experiments to show how deformation upon impact can make materials stronger and tougher. (Credit: Thomas Group/Rice University)

A cross-section composite image of a silver microcube impacted on its side shows decreasing grain size closer to where the deformed cube hit the target. Rice University scientists believe their research will lead to better materials for high-impact applications. (Credit: Thomas Group/Rice University)

Editor's note: Links to an animation, a video and high-resolution images for download appear at the end of this release.

Smashing metallic cubes toughens them up 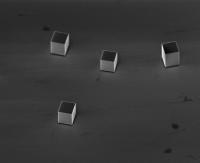