As the remnants of former tropical cyclone Beryl moved through the northern Leeward Islands and Puerto Rico, the Global Precipitation Measurement mission or GPM core satellite gathered important rainfall data on the storm.

Harold Pierce of NASA's Goddard Space Flight Center in Greenbelt, Maryland, used GPM data to create images and animations of the rainfall and cloud heights in the storm. Pierce said, "Beryl's remnants still contained areas of strong convective storms as it passed near the island of Dominica. GPM's Microwave Imager (GMI) and Dual-Frequency Precipitation Radar (DPR) instruments showed that strong convective storms northeast of Dominica were dropping rain at a rate of greater than 75 mm (2.95 inches) per hour. "

Dominica is still recovering from Hurricane Maria which devastated the island last year. Most of the homes on Dominica were damaged or destroyed.

The GPM core satellite again passed above the remnants of Beryl again on July 9, 2018 at 8:41 a.m. EDT (1241 UTC) as bands of rain were moving over Puerto Rico. That satellite pass showed that overall rainfall intensity was much lower but very heavy rain was occurring in a small area along Puerto

Rico's southeastern coast. Intense storms there were measured by GPM's radar dropping rain at a rate of over 81 mm (3.2 inches) per hour.

At NASA Goddard, Pierce used the GPM satellite's radar (DPR Ku Band) data to create a 3-D structure of precipitation within Beryl's remnants. A few of the most powerful convective storms in the Windward Islands were found by DPR to reach heights of about 16 km (9.9 miles).

At 8 a.m. EDT on July 10, the National Hurricane Center (NHC) noted that Beryl's remnants were affecting Hispaniola, the island that contains Haiti and the Dominican Republic. At that time, remnants of Beryl were producing gusty winds and areas of heavy rain over portions of central and eastern Hispaniola, and the adjacent Atlantic and Caribbean waters.

The NHC forecast calls for the system to move west-northwestward across the rest of Hispaniola today and over the southeastern Bahamas this evening. NHC forecasters said "Little development is expected during the next day or so due to land interaction and unfavorable upper-level winds. The disturbance is forecast to turn northward over the western Atlantic on Wednesday where upper-level winds could become a little more conducive for the regeneration of a tropical cyclone later this week. Regardless of development, locally heavy rains and gusty winds are likely over portions of Hispaniola and the Bahamas as the remnants of Beryl move through those areas."

Across the regional waters and across coastal areas of northern and southern Puerto Rico, including Vieques and Culebra, the NWS expects sustained winds in excess of 20 mph. 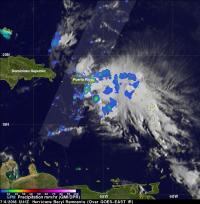