It's no surprise that some frogs secrete poison from glands in their skin. But researchers reporting in the Cell Press journal Current Biology on August 6 have discovered the first two species of frog, both living in Brazil, that are actually venomous. Not only do the frogs produce potent toxins, but they also have a mechanism to deliver those harmful secretions into another animal using bony spines on their heads.

"Discovering a truly venomous frog is nothing any of us expected, and finding frogs with skin secretions more venomous than those of the deadly pit vipers of the genus Bothrops was astounding," says Edmund Brodie, Jr. of Utah State University.

The frogs in question, Corythomantis greeningi and Aparasphenodon brunoi, have both been known for many decades, if not centuries. But scientists have known little of their biology. The frogs have no known predators, which makes perfect sense in light of these latest findings.

Brodie and Carlos Jared of Instituto Butantan in São Paulo have both studied predator-prey systems of amphibians for their entire careers. Unfortunately for Jared, he first realized that C. greeningi might be venomous firsthand while collecting frogs for research. His hand was injured by one of the frog's spines, which led to intense, radiating pain for a period of about 5 hours.

Needless to say, that event got the researchers' attention. "This action should be even more effective on the mouth lining of an attacking predator," Jared says.

There was a bit of luck: the species that got Jared was the less toxic of the two.

The researchers' calculations suggest that a single gram of the toxic secretion from the other frog species, A. brunoi, would be enough to kill more than 300,000 mice or about 80 humans.

"It is unlikely that a frog of this species produces this much toxin, and only very small amounts would be transferred by the spines into a wound," Brodie says. "Regardless, we have been unwilling to test this by allowing a frog to jab us with its spines."

The researchers say the new discovery is important for understanding the biology of amphibians and their interactions with predators in the wild.

The researchers plan to better characterize the venom and the skin glands that produce the venom. Brodie and Jared say they'll also be studying several other frog species from around the world, which they also suspect to be venomous.

The research was supported by FAPESP, CAPES, and CNPq.

The heads of these Brazilian frogs are venomous weapons 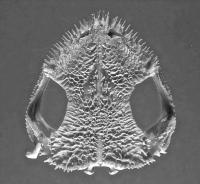