San Francisco, CA--December 10, 2019-- Prellis Biologics, Inc. has developed an intuitive web-based interface tailored for biologists and tissue engineers that can be learned in minutes. TissueWorkshop™ takes a set of user inputs and applies generative design principles to produce libraries of 3D scaffolds much like hollow blood vessels.

"Every day I saw my expert team toiling away designing CAD files by hand. The time it took to design a single file is prohibitive for us to quickly answer relevant 3D tissue engineering questions," said Prellis Biologics' CEO Melanie Matheu, PhD.

"We had to move the bar on iteration time. We're the first team in the world that can begin to ask the question of which high-resolution scaffold is best for building a liver or piece of cartilage. I didn't want my team spending decades of human-powered design time to do so," she said.

TissueWorkshop™ was built with tools and principles used in video game development and 3D animation. Gavan Wilhite, founder of AltspaceVR, developed this novel approach to human tissue engineering specifically with biologists and tissue engineers in mind.

"The gaming industry has poured tremendous resources into tools that are often unfamiliar to those outside the sector. It's a special joy to use them to accelerate the positive impact that tissue engineering has to offer," said Wilhite.

Tailored for biologists and tissue engineers, the software is an intuitive design system that can be learned in minutes, while many standard CAD software programs require multiple university level classes that are not typically part of the biological scientist's curriculum.

TissueWorkshop™ allows users to build CAD files that match most 3D printer resolutions of 50 and 100 microns, allowing printing of structures on extrusion bioprinters such as the BIO X6 from CELLINK, Inc.

"The BIO X6 gives the user freedom to combine multiple materials in one print and the capability to create more complex architectures," said Itedale Namro Redwan, CSO, CELLINK. "Being able to use different pressures, temperatures and printing methods simultaneously in six different positions is revolutionary, providing the cells with the biological environment they need to achieve the desired architecture," she said.

"Finding the best architecture has been incredibly challenging due to the inability to scan potential 3D structures in an unbiased way with available CAD programs," says Erin Stephens, PhD, Director of Tissue Engineering at Prellis. "It would simply take too long."

TissueWorkshop™ is also available to build structures at the 1-micron resolution for owners of the Holograph-X system sold by CELLINK, Inc.

"The Holograph-X Bioprinter enables in-lab manufacturing of capillary-containing organ structures and tissues for transplantation, therapeutics screening and complex 3D culture development," said Erik Gatenholm, CEO, CELLINK. "We've combined key strengths of our two companies, resulting in cutting edge technology for our partners and customers and empowering them to advance their research in the field of 3D-bioprinting of human organs."

More information on Prellis Biologics can be found here. 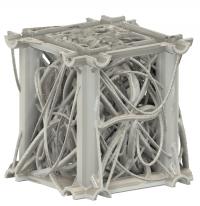