Citrus is the world's most widely cultivated fruit crop. In the U.S. alone, the citrus crop was valued at over $3.1 billion in 2013. Originally domesticated in Southeast Asia thousands of years ago before spreading throughout Asia, Europe, and the Americas via trade, citrus is now under attack from citrus greening, an insidious emerging infectious disease that is destroying entire orchards. To help defend citrus against this disease and other threats, researchers worldwide are mobilizing to apply genomic tools and approaches to understand how citrus varieties arose and how they respond to disease and other stresses.

In a study published in the June 2014 edition of Nature Biotechnology, an international consortium of researchers from the United States, France, Italy, Spain, and Brazil analyzed and compared the genome sequences of ten diverse citrus varieties, including sweet and sour orange along with several important mandarin and pummelo cultivars. The consortium, led by Fred Gmitter of the University of Florida Citrus Research and Education Center, found that these diverse varieties are derived from two wild citrus species that diverged in Southeast Asia over five million years ago.

The U.S. Department of Energy Joint Genome Institute (DOE JGI) contributed to the citrus pilot project, Gmitter said, harnessing their expertise in plant genomics and capacity for high throughput sequencing. Initial support for the citrus effort arose 10 years ago under the auspices of the inaugural round of the Community Science Program (CSP—formerly the Community Sequencing Program), which seeks to build scientific communities around cornerstone species of relevance to DOE missions in bioenergy, carbon cycling and biogeochemistry. There is a fledgling industrial effort underway in Florida to redirect the five million tons of annual citrus waste generated there from low-value cattle feed to produce ethanol for fuel. The research team's citrus trait analysis will inform breeding strategies beyond important agronomic traits.

One of these wild species gave rise to cultivated pummelo, the largest citrus fruit that can often range from two to four pounds. Surprisingly, the small, easily peeled mandarins were, in contrast, found to be genetic mixtures of a second species and pummelo. Sweet orange, the most widely grown citrus variety worldwide, was found to be a complex genetic hybrid of mandarin and pummelo, presumably accounting for its unique qualities. Seville or sour orange, commonly used in marmalade, was found to be an unrelated interspecific hybrid.

Since citrus varieties are reproduced asexually by vegetative propagation, trees producing a specific type of fruit are typically genetically identical. This growing strategy produces a uniform, high-quality fruit, but has the drawback that if one tree is susceptible to disease, they all are. By inferring the past hybridization events that gave rise to these common citrus varieties -- either in the wild populations before domestication, or in early undocumented human-directed breeding efforts -- the team hopes to enable strategies for improving citrus, including resistance to greening and other diseases. "Now that we understand the genetic structure of sweet orange, for example, we can imagine reproducing the unknown early stages of citrus domestication using modern breeding techniques that could draw from a broader pool of natural variation and resistance," Gmitter said.

The genomes presented in the published study included pummelos, oranges and mandarins. One of the sequences was the high-quality reference genome of Clementine mandarin sequenced by an international consortium including Genoscope in France, the Institute for Genomic Applications in Italy, the DOE JGI, and the HudsonAlpha Institute for Biotechnology, with contributions from researchers in Spain and Brazil. Another was the sweet orange genome, produced jointly by researchers at the DOE JGI, the University of Florida, and 454 Life Sciences, a Roche company. By understanding the relationships between the various cultivated species with what they describe as "very narrow genetic diversity," the researchers hope to enable sequence-directed improvement, which could lead to crops that are more resistant to disease and stresses such as environmental changes.

The analyses revealed that while pummelos represent a single citrus species (Citrus maxima), the same cannot be said of cultivated mandarins, even those long held as not having intermixed with other varieties. Comparing sequences of so-called "traditional" mandarins such as the Asian cultivar Ponkan and the Mediterranean cultivar Willowleaf with mandarins known to be developed hybrids indicated that all contain segments of the pummelo genome. The "wild" Mangshan mandarin from China is an exception to the rule, as its genome revealed it was in fact a separate species from other cultivated mandarins.

The findings echo Gmitter's quip when he spoke at the DOE JGI's 7th Annual Genomics of Energy & Environment Meeting in March 2012. "Citrus has incestuous genes," he told the audience. "Nothing is pure."

For more information about the Clementine mandarin and sweet orange genomes, visit Phytozome at phytozome.net. To revisit Fred Gmitter's talk at the DOE JGI 2012 Genomics of Energy & Environment Meeting, go to http://bit.ly/JGI7Gmitter. 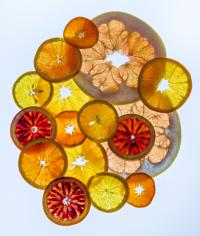