LOGAN, UTAH - Two professors of mechanical engineering at Utah State University will receive grants from the U.S. Department of Energy totaling $5.8 million for nuclear energy research. The news came in a Tuesday announcement from DOE officials who awarded more than $35 million to 48 university-led nuclear research and development projects around the country through the Nuclear Energy University Program, or NEUP.

Heng Ban, a professor of mechanical and aerospace engineering, will receive a $5 million grant to study nuclear fuel safety and performance. Ban and an international team of collaborators including universities, industry, national labs and government regulatory agencies will conduct a series of experiments on newly designed nuclear fuel materials that are safer and more tolerant to conditions similar to those that led to the Fukushima Daiichi nuclear disaster in 2011.

Ban says the research will advance our understanding of fuel behavior and performance in accident conditions and provide experimental and computational tools for DOE's Accident Tolerant Fuels program. The research will focus on several key technical areas that are critical to the safety of nuclear power generation.

His collaborators include USU College of Engineering Assistant Professors Ling Liu and Ryan Berke who will investigate how the extreme temperatures common to nuclear reactors affect the cladding material that encases nuclear fuel pellets.

Many of the experimental phases of the research will take place at Idaho National Laboratory's Transient Reactor Test Facility, or TREAT. This complex west of Idaho Falls, was originally designed to test reactor fuels and structural materials and will be used in the coming years to test accident-tolerant fuels and supporting structures.

USU Professor Barton Smith will receive $800,000 to provide experimental flow data for assessing the accuracy of computer models. The experiments will be for natural convection flow through parallel channels and mimic flow through a nuclear reactor during accident scenarios. The findings will ultimately help improve computer models that predict how reactor cooling systems behave in an accident scenario.

Smith will collaborate with Mark Kimber, an assistant professor of nuclear engineering at Texas A&M University.

In addition to DOE's NEUP grants, the agency awarded millions in additional funding to help promote innovative nuclear technologies toward commercialization and into the market.

"Nuclear power is our nation's largest source of low-carbon electricity and is a vital component in our efforts to both provide affordable and reliable electricity and to combat climate change," said Energy Secretary Ernest Moniz in a prepared DOE statement. "These awards will help scientists and engineers as they continue to innovate with advanced nuclear technologies." 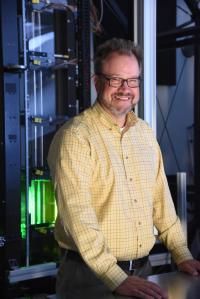