Tree rings tell us a lot about what the climate was like in the past and are therefore used by researchers for climate reconstructions - something that is particularly relevant in a time of climate change. However, since the 1960s, the rings of trees have no longer provided an accurate reflection of temperature development. This problem, known as divergence, is the starting point for a new research project, for which paleoclimatologist Professor Jan Esper of Johannes Gutenberg University Mainz (JGU) will be receiving more than EUR 2.5 million in EU funding. Over the project's five-year duration, Esper and his team will track the development of trees at 100 sites in the Northern Hemisphere to develop a new model for the reconstruction of tree growth that will generate reliable data for climate research. The European Research Council (ERC) has awarded Professor Jan Esper and his MONOSTAR project an ERC Advanced Grant, the EU's most richly endowed funding award that is earmarked for outstanding researchers.

Tree rings present a prime archive in which hundreds of years' worth of climatic developments have been recorded in great detail, from regional to global scales. However, climate reconstructions depend on reliable correlations between tree growth and climate. "It worked very well up until the second half of the last century," explained Esper. "But since the 1960s, the tree ring width and densities have not been able to keep pace with global warming." It was during the 1990s that the divergence problem was recognized as a phenomenon with far-reaching consequences. Not only does it undermine the reliability of temperature reconstructions based on tree rings, it also has implications for our understanding of how sensitive the Earth's climate is to man-made greenhouse gases. "The problem impacts all climate reconstructions based on year-to-year changes over the past 1,000 to 2,000 years," Esper pointed out.

Sampling and monitoring tree sites in the Northern Hemisphere

The scientist therefore proposed to start by collecting new data, among other tasks. To this end, Esper and his team along with cooperation partners from many different countries will launch a uniquely international project to record the growth of various species of conifers in cold locations and in boreal coniferous forests of the Northern Hemisphere. The width and density of tree rings will be measured at 100 locations, from the Rocky Mountains through the Alps and as far as the Himalayas. Additional extensive monitoring procedures will be carried out at ten of these locations in order to collect detailed findings on influencing factors so that a new tree ring density model can be created. The core samples from each of the locations will be analyzed at two laboratories in Germany, one lab in Russia, and another one in Switzerland.

Studying the influence on ecology, archeology and history beyond climate research

Paleoclimatologists suspect that temperature is not necessarily the only decisive factor in the divergence problem. "There are many other influencing factors that can influence plant growth in extreme locations, such as levels of ozone or changes in radiation," added Esper. The results of MONOSTAR, an acronym for Modeling Non-Stationary Tree Growth Responses to Global Warming, could have far-reaching consequences: If historical warm periods and climate changes can be reconstructed more accurately, this will not only help climate researchers, but will also spark new research ideas in ecology, archeology, and historical studies.

Jan Esper studied and later earned a doctorate in geography at the University of Bonn. After a postdoc position at Columbia University in New York City, he continued his work on dendrochronology at the Swiss Federal Institute for Forest, Snow and Landscape Research (WSL), and qualified as a professor at the University of Bern. Since 2010, Esper has been a professor at the Department of Geography at Johannes Gutenberg University Mainz. He became a member of the Academy of Sciences and Literature in 2018. His research focuses on the paleoclimate, urban climate, and dendrochronology.

ERC Advanced Grants are awarded to outstanding researchers to enable them to undertake projects considered to be highly speculative due to their innovative approach, but which, because of this, can open up access to new approaches in the corresponding research field. Only researchers who have already made significant breakthroughs and have been successfully working for at least ten years at the highest levels of international research are eligible for the grant. The only criteria considered in awarding ERC funding are the academic excellence of the researcher in question and the nature of their research project. An ERC grant thus also represents acknowledgement of the individual achievements of the recipient.

https://www.blogs.uni-mainz.de/fb09climatology/ - Climatology Group at the JGU Institute of Geography 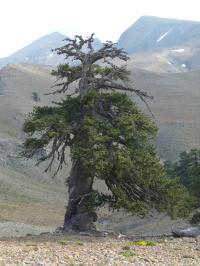