When Hurricane Eugene was nearing its peak, NASA analyzed the storm's heavy rainfall over the open waters of the Eastern Pacific Ocean. That rainfall has lessened as Eugene has weakened to a tropical storm on July 11.

Hurricane Eugene formed on July 7, 2017, in the eastern Pacific Ocean south of the Baja Peninsula. On July 8 at 10:36 p.m. EDT (July 9 at 0236 UTC) the Global Precipitation Measurement mission or GPM core satellite passed over the storm and measured rainfall intensity.

Eugene reached its peak power later that day with its maximum sustained wind speeds reaching about 100 knots (115 mph). The center of GPM's track passed to the west of Eugene's eye. Data collected by GPM's Dual-Frequency Precipitation Radar (DPR) instrument showed that powerful storms in the northwestern quadrant of the hurricane were dropping rain at a rate of over 186 mm (7.3 inches) per hour. GPM's Microwave Imager (GMI) also showed that the most intense precipitation was falling on the northwestern side of Eugene's eye.

At NASA's Goddard Space Flight Center in Greenbelt, Maryland, where the GPM data was analyzed, a 3-D view of the storm was created to show cloud heights. The 3-D view of precipitation structure was derived from GPM's radar (DPR Ku Band) data. Those data showed that storm tops in the northwestern quadrant of the hurricane were reaching heights of about 9 km (5.6 miles). GPM is a joint mission between NASA and the Japanese space agency JAXA.

By July 11, Eugene had weakened to tropical storm status as it continued tracking into cooler waters. Tropical cyclones like Eugene need sea surface temperatures of at least 80 degrees Fahrenheit (26.6 degrees Celsius) to maintain strength, and the area in which Eugene has moved has temperatures below that threshold. The National Hurricane Center noted that with sea surface temperatures decreasing below 71.6 degrees Fahrenheit (22 degrees Celsius) ahead of Eugene, the cyclone's winds and convection will continue to wane, and it will likely degenerate into a remnant low July 12 at 2 p.m. EDT.

Rainfall had greatly diminished in Eugene since GPM passed overhead on July 8. Today, July 11, satellite microwave images indicated that all the remaining deep convection and strongest thunderstorms with the heaviest rain is restricted to Eugene's northwestern quadrant.

At 5 a.m. EDT (0900 UTC), the center of Tropical Storm Eugene was located near 20.6 degrees north latitude and 118.7 degrees west longitude. That's about 545 miles (880 kilometers) south-southwest of Punta Eugenia, Mexico. Eugene was moving toward the northwest near 9 mph (15 kph), and this motion is expected to continue over the next day.

Maximum sustained winds have decreased to near 65 mph (100 kph) with higher gusts. Additional weakening is forecast during the next 48 hours, and Eugene is expected to degenerate into a remnant low pressure area on July 12.

Despite its distance from western Mexico, the National Hurricane Center cautioned about ocean swells and rip tides along coastal areas. Swells generated by Eugene will continue to propagate northward along the west coast of the Baja California peninsula to southern California during the next few days, causing high surf and dangerous rip current conditions. 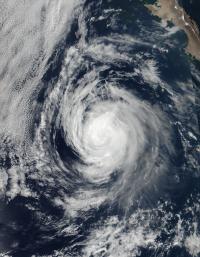