New evidence published in Science by Smithsonian geologists dates the closure of an ancient seaway at 13 to 15 million years ago and challenges accepted theories about the rise of the Isthmus of Panama and its impact on world climate and animal migrations.

A team analyzed zircon grains from rocks representing an ancient sea and riverbeds in northwestern South America. The team was led by Camilo Montes, former director of the Panama Geology Project at the Smithsonian Tropical Research Institute. He is now at the Universidad de los Andes.

The team's new date for closure of the Central American Seaway, from 13 to 15 million years ago, conflicts with the widely accepted 3 million year date for the severing of all connections between the Atlantic and the Pacific, the result of work done by the Panama Paleontology Project, directed by emeritus scientists Jeremy B.C. Jackson and Anthony Coates, also at the Smithsonian Tropical Research Institute.

If a land connection was complete by this earlier date, the rise of the Isthmus of Panama from the sea by tectonic and volcanic action predates the movement of animals between continents known as the Great American Biotic Interchange. The rise of the Isthmus is implicated in major shifts in ocean currents, including the creation of the Gulf Stream that led to warmer temperatures in northern Europe and the formation of a great ice sheet across North America.

"Beds younger than about 13 to 15 million years contain abundant zircon grains with a typically Panamanian age," said Montes. "Older beds do not. We think these zircons were deposited by rivers flowing from the Isthmus of Panama when it docked to South America, nearly 10 million years earlier than the date of 3 million years that is usually given for the connection."

The new model sends scientists like the University of Colorado at Boulder's Peter Molnar off to look for other explanations for climate change. Molnar wrote in the journal Paleoceanography, "...let me state that the closing of the Central America Seaway seems to be no more than a bit player in global climate change. Quite likely it is a red herring."

"What is left now is to rethink what else could have caused such dramatic global processes nearly 3 million years ago," said Carlos Jaramillo, Smithsonian Tropical Research Institute scientist and member of the research team.

The Smithsonian Tropical Research Institute, headquartered in Panama City, Panama, is a unit of the Smithsonian Institution. The institute furthers the understanding of tropical nature and its importance to human welfare, trains students to conduct research in the tropics and promotes conservation by increasing public awareness of the beauty and importance of tropical ecosystems. Website: http://www.stri.si.edu 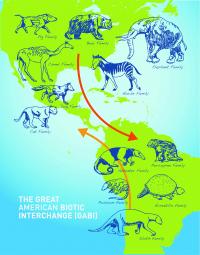