It's the big astrophysical whodunnit. Across the Universe, galaxies are being killed and the question scientists want answered is, what's killing them?

New research published today by a global team of researchers, based at the International Centre for Radio Astronomy Research (ICRAR), seeks to answer that question. The study reveals that a phenomenon called ram-pressure stripping is more prevalent than previously thought, driving gas from galaxies and sending them to an early death by depriving them of the material to make new stars.

The study of 11,000 galaxies shows their gas--the lifeblood for star formation--is being violently stripped away on a widespread scale throughout the local Universe.

Toby Brown, leader of the study and PhD candidate at ICRAR and Swinburne University of Technology, said the image we paint as astronomers is that galaxies are embedded in clouds of dark matter that we call dark matter halos.

Dark matter is the mysterious material that despite being invisible accounts for roughly 27 per cent of our Universe, while ordinary matter makes up just 5 per cent. The remaining 68 per cent is dark energy.

"During their lifetimes, galaxies can inhabit halos of different sizes, ranging from masses typical of our own Milky Way to halos thousands of times more massive," Mr Brown said.

"As galaxies fall through these larger halos, the superheated intergalactic plasma between them removes their gas in a fast-acting process called ram-pressure stripping.

"You can think of it like a giant cosmic broom that comes through and physically sweeps the gas from the galaxies."

"It dictates the life of the galaxy because the existing stars will cool off and grow old," he said.

"If you remove the fuel for star formation then you effectively kill the galaxy and turn it into a dead object."

ICRAR researcher Dr Barbara Catinella, co-author of the study, said astronomers already knew ram-pressure stripping affected galaxies in clusters, which are the most massive halos found in the Universe.

"This paper demonstrates that the same process is operating in much smaller groups of just a few galaxies together with much less dark matter," said Mr Brown.

"Most galaxies in the Universe live in these groups of between two and a hundred galaxies," he said.

"We've found this removal of gas by stripping is potentially the dominant way galaxies are quenched by their surrounds, meaning their gas is removed and star formation shuts down."

The study was published in the journal Monthly Notices of the Royal Astronomical Society.

Mr Brown said the other main process by which galaxies run out of gas and die is known as strangulation.

"Strangulation occurs when the gas is consumed to make stars faster than it's being replenished, so the galaxy starves to death," he said.

"It's a slow-acting process. On the contrary, what ram-pressure stripping does is bop the galaxy on the head and remove its gas very quickly--of the order of tens of millions of years--and astronomically speaking that's very fast."

Original Publication: 'Cold gas stripping in satellite galaxies: from pairs to clusters', published in the Monthly Notices of the Royal Astronomical Society on January 17th, 2017. Available from http://www.icrar.org/galaxy-murder-mystery (embargo period password is 'darkenergy')

Multimedia: An animation and high-resolution images are available from http://www.icrar.org/galaxy-murder-mystery (Embargo period password is 'darkenergy') 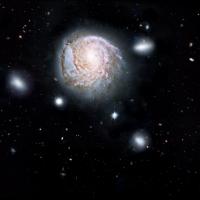 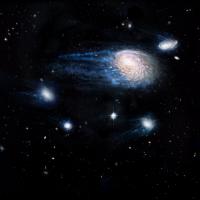