CHAMPAIGN, Ill. — Good news for control freaks! New research confirms that having some authority over how one takes in new information significantly enhances one's ability to remember it. The study, in the journal Nature Neuroscience, also offers a first look at the network of brain structures that contribute to this phenomenon.

"Having active control over a learning situation is very powerful and we're beginning to understand why," said University of Illinois psychology and Beckman Institute professor Neal Cohen, who led the study with postdoctoral researcher Joel Voss. "Whole swaths of the brain not only turn on, but also get functionally connected when you're actively exploring the world."

The study focused on activity in several brain regions, including the hippocampus, located in the brain's medial temporal lobes, near the ears. Researchers have known for decades that the hippocampus is vital to memory, in part because those who lose hippocampal function as a result of illness or injury also lose their ability to fully form and retain new memories.

But the hippocampus doesn't act alone. Robust neural connections tie it to other important brain structures, and traffic on these data highways flows in both directions. Functional magnetic resonance imaging (fMRI) studies, which track blood flow in the brain, show that the hippocampus is functionally connected to several brain networks – distinct regions of the brain that work in tandem to accomplish critical tasks.

To better understand how these brain regions influence active versus passive learning, Voss designed an experiment that required participants to memorize an array of objects and their exact locations in a grid on a computer monitor. A gray screen with a window in it revealed only one object at a time. The "active" study subjects used a computer mouse to guide the window to view the objects.

"They could inspect whatever they wanted, however they wanted, in whatever order for however much time they wanted, and they were just told to memorize everything on the screen," Voss said. The "passive" learners viewed a replay of the window movements recorded in a previous trial by an active subject.

Then participants were asked to select the items they had seen and place them in their correct positions on the screen. After a trial, the active and passive subjects switched roles and repeated the task with a new array of objects.

The study found significant differences in brain activity in the active and passive learners. Those who had active control over the viewing window were significantly better than their peers at identifying the original objects and their locations, the researchers found. Further experiments, in which the passive subjects used a mouse that moved but did not control the viewing window, established that this effect was independent of the act of moving the mouse.

To identify the brain mechanisms that enhanced learning in the active subjects, the researchers repeated the trials, this time testing individuals who had amnesia – a disease characterized by impairment in learning new information – as a result of hippocampal damage. To the surprise of the researchers, these participants failed to benefit from actively controlling the viewing window.

"These data suggest that the hippocampus has a role not just in the formation of new memory but possibly also in the beneficial effects of volitional control on memory," the researchers wrote.

Brain imaging (by means of fMRI) of healthy young subjects engaged in the same active and passive learning tests revealed that hippocampal activity was highest in the active subjects' brains during these tests. Several other brain structures were also more engaged when the subject controlled the viewing window, and activity in these brain regions was more synchronized with that of the hippocampus than in the passive trials.

Activity in the dorsolateral prefrontal cortex, the cerebellum and the hippocampus (see cartoon) was higher, and more highly coordinated, in participants who did well on spatial recall, the researchers found. Increased activity in the inferior parietal lobe, the parahippocampal cortex and the hippocampus (see cartoon) corresponded to better performance on item recognition.

The new findings challenge previous ideas about the role of the hippocampus in learning, Voss said. It is a surprise, he said, that other brain regions that are known to be involved in planning and strategizing, for instance, "can't do very much unless they can interact with the hippocampus."

Rather than being a passive player in learning, the hippocampus "is more like an integral part of an airplane guidance system," Voss said. "You have all this velocity information, you have a destination target and every millisecond it's taking in information about where you're headed, comparing it to where you need to go, and correcting and updating it."

The paper, "Hippocampal Brain-network Coordination During Volitional Exploratory Behavior Enhances Learning," is available online or from the U. of I. News Bureau. 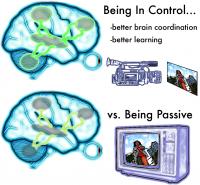 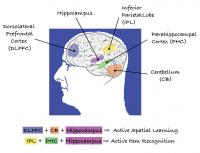