'State capacity' refers to a state's ability to make and effectively implement decisions in domestic and foreign policy. In a study, HSE University political scientists evaluated the state capacity of 142 countries. Based on their findings, the researchers created and trialed a state capacity index, identified eight models of state capacity, and compiled a general international ranking. https://publications.hse.ru/mirror/pubs/share/direct/276237531

extractive (financial resources, including taxation, available to the state);

Each of them is measured by certain indicators, the total number of which is six:

Aggregated indicator of violence control inside the country (statistics of domestic murders and victims of domestic conflicts - number of cases per 100,000 of population);

Collectability of revenue taxes (% of GDP);

Aggregate income of the state budget (% of GDP);

All of these factors formed the basis of the HSE University study. The researchers analyzed these indicators in 142 countries based on data from 2015.

The ranking that resulted from the analysis revealed groups of 'leaders' and 'outsiders'. The first group included countries with the highest performances in all three dimensions of state capacity, while the second one included those with the lowest.

Russia falls approximately in the middle of the ranking, ranking alongside Argentina and Mauritius. Meanwhile, according to the authors, with the exception of the two groups that make up the ranking's top and bottom, its largest segment -- the middle (which includes Russia) -- is 'full of if not awkward then difficult to explain groupings', where equally surprising results. For example, Ukraine appears close to Surinam and Senegal, while Kazakhstan ranks next to Bhutan and Albania.

From Ranking to Clusters

The resulting ranking demonstrates that you cannot study and compare the state capacity of different countries by one value. Methodological problems arise from an approach that relies on the principle, 'the more, the better': for example, if one wants a certain country to move up in the ranking, all one has to do is increase one indicator while preserving the other indicators at the same level. This leads to a loss of multi-dimensionality and the importance of specific combinations of state capacity indicators. For example, 'Is it that necessary for countries, such those in Scandinavia, to increase their coercive capacity, when their institutions work quite well?'

That is why cluster analysis has been used to detect different models of state capacity, which 'do not fit into one quantitative scale'.

The scholars used it to divide the countries into eight clusters (types) of state capacity, which were named as follows:

The oil and gas needle;

On the verge of failure;

Researchers don't believe this list to be indisputable and finalized. It is just a starting point for further investigation. But they don't underestimate the magnitude of their work: '142 countries have been clustered, 79 of which fit into stable associations'.

The first two clusters are variations of one model. It is characterized by:

The administrative-bureaucratic component of state capacity prevails in countries of this cluster. 'The quality of institutions and the legality of the economy provide for high tax collection rates, while the differences may be considerable. For example, even in the Successful Development group, the share of tax revenues in GDP varies from 18.7% in Japan to 44.7% in Denmark, which is quite natural, since this indicator depends on the country's economic policy.'

The difference from the Successful Development model is a stronger coercive function (expressed in the considerable share of military expenditures in GDP).

'Maintaining almost "maximum" levels of institutional and coercive potentials is not achieved by "pumping" a lion's share of national wealth through the state apparatus. This is particularly clear from the share of public revenues in GDP: it is 29.9% in Israel, 27.8%in the USA, and only 18.9% in Singapore.

The Oil and Gas Needle

In this model, the coercive function dominates (countries have some of the world's biggest military expenditures and effective violence control within the state). Domination is provided mainly thanks to budget revenues from extraction of mineral resources.

Easily collected oil and gas revenues and their concentration in the legal sector make the existence of a shadow economy unnecessary, and they do not require high quality institutions and serious inflows of 'traditional' taxes: the share of tax revenue in the GDP is comparatively high only in the UAE (12%), with 0.64% in Bahrain, 1.17% in Kuwait, 1.68% in Saudi Arabia, 2.79% in Oman, and 6.51% in Qatar.

These include countries where all state capacity indicators are weak or close to minimal, but with maintained violence control function.

On the Verge of Failure

In terms of state capacity, these countries are close to 'outsiders'. The critical difference is that they have almost lost their ability to control violence.

These countries have a considerable potential of state capacity, but are not leaders in these terms.

Despite their status as the biggest arms importers, their military expenditures as a share of their GDP are moderate (about 2% in China and about 2.5% in India).

The quality of administrative institutions is not high, while 'public systems provide for a rather low level of violence with legitimate economic operations'.

The fundamental component of state capacity is military-coercive with a focus on military expenditures (over 4% of the GDP in both countries in 2015).

Violence control within the country is average. The administrative-bureaucratic component looks 'not impressive, to say the least, particularly in terms of quality of institutions'.

'Talks of "total governmentalisation" of the Russian economy are not confirmed by the data, at least that of 2015. Russia, with its public revenue comprising 29% of its GDP, is not comparable to Oman and Qatar (where it comprises 47.5 and 42.7%), on the one hand, nor to Norway or Finland (44% and 41.4%), on the other'.

Azerbaijan and Russia are the only post-Soviet countries with stable results in the cluster analysis. The researchers named only one stable feature of other post-Soviet countries: 'the ability to join the weirdest associations, which can hardly be explained reasonably.' The scholars concluded that 'probably this means that there is no common "post-Soviet" type of state capacity.'

State capacity: How it is measured and compared 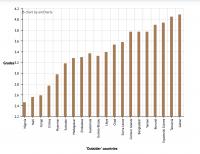