Douglas McCauley, a new assistant professor in UC Santa Barbara's Department of Ecology, Evolution and Marine Biology, does fieldwork in one of the most isolated places in the world — Palmyra Atoll. About halfway between Hawaii and American Samoa, this complex of small islands and inlets in the central Pacific is surrounded by more than 15,000 acres of coral reefs and encircles three lagoons.

Named after the American ship whose captain discovered it in 1802, Palmyra contains a 12-square-kilometer national wildlife refuge, part of the larger Pacific Remote Islands Marine National Monument established in 2009. It is here McCauley and his colleagues chose to study the ecology of Manta alfredi. Manta rays are classified as vulnerable by the International Union for Conservation of Nature and are present at this site in surprisingly large numbers. The researchers' findings appear in the journal Marine Biology.

"There is very little known scientifically about manta rays," said McCauley. "If we want to understand what habitats are important to them or how to address their vulnerability or even assess it, we need to learn some basic things about their ecology. So we did just that."

Manta rays are a highly mobile species that can travel across many different parts of the ocean. McCauley's team decided to focus on how mantas use Palmyra's lagoons. Lagoons are known to be ecologically important to a variety of mobile species including manta rays, sharks, turtles and dolphins.

"We used high-resolution animal tracking tools to describe in as much detail as we could the ecology of the mantas and their connection to this particular marine habitat," McCauley explained.

Using a novel combination of research tools, the scientists examined how the manta rays use lagoons, what particular habitat microfeatures are important and what drivers make the fish come and go from Palmyra's lagoons.

Very heavily used by mobile animals as breeding grounds and as places to feed, lagoons are highly sensitive to human disturbance. Although there is no evidence that Palmyra ever supported permanent indigenous settlements, its habitats were dramatically affected during World War II when it was occupied by American troops.

"Lagoons are often very imperiled places, so that was certainly part of our interest," McCauley said. "Palmyra's lagoons and the mantas that use them are protected. However, lagoons elsewhere have been compromised. Fishing, boat traffic and habitat degradation all may negatively affect mantas in less remote lagoons."

The big question McCauley and his team wanted to answer is why manta rays congregate in this particular habitat. It turns out it was at least partially because of the food.

The researchers used stable isotope analysis, a chemical assay of a tissue biopsy that provides an integrative view of what the animal ate in previous months. They matched the chemical signature of the mantas to that of zooplankton collected in the lagoons, verifying that this habitat serves as an important feeding ground.

"Using mathematical modeling we determined that many of the manta rays we encountered took around 80 percent of their energy from lagoon plankton," McCauley said. "This discovery that lagoons can contribute such an important amount of food and energy to manta rays highlights the need to motivate management interventions in lagoons."

Other tools in the researchers' arsenal were high-resolution tracking, which provided information about how the manta rays used the lagoon habitat over long and short periods of time; an acoustic camera, which logged patterns of the animals entrances and departures from the lagoons; and photo identification/laser photogrammetry — making measurements from photographs — which provided insight into whether the manta rays were staying in this habitat for longer time periods by tracking their comings and goings.

"Because we were trying to produce a more complete picture of manta ray ecology, we had to use a toolkit that pulled out different fleeting pictures and then combined them in a composite view, which tells us more accurately what the manta rays are doing," McCauley said.

In trying to produce science that is meaningful and useful for managers, McCauley and his team focused on a particular population using a particular habitat. "But there is a lot yet to be learned," he noted. "Additional detailed information about how manta rays use ocean areas outside of lagoons will also be needed to better manage this at-risk species."

A case study of manta rays and lagoons 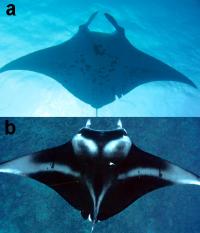 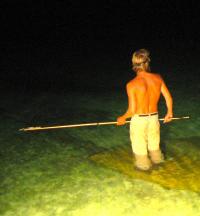