COLUMBIA, Mo. - The past few decades have seen the rise of global incentive programs offering payments to landowners to help reduce tropical deforestation. Until now, assessments of these programs have largely overlooked decreases in forest diversity. In what might be a first of its kind study, University of Missouri researchers have integrated forest imaging with field-level inventories and landowner surveys to assess the impact of conservation payments in Ecuador's Amazon Basin forests. They found that conservation payment programs are making a difference in the diversity of tree species in protected spaces. Further, the species being protected are twice as likely to be of commercial timber value and at risk of extinction.

"It has been widely proven that degradation of tropical forests have major implications for carbon cycles and biodiversity; yet, destruction of these forests still occur at alarming rates," said Francisco Aguilar, associate professor of forestry in the MU School of Natural Resources. "More than 7 billion acres of tropical rain forests were destroyed between 1995 and 2015, so policy makers established voluntary compensation programs to slow down tropical deforestation and degradation. While these programs seem to be making a difference, there aren't enough on-the-ground evaluation tools to see if biodiversity is being maintained, too. Therefore, we looked for other ways to observe the value of these payments for forest conservation."

Findings revealed that PSB prevented 9 percent of enrolled forest area from being deforested between 2008 and 2014, which is higher than previous assessments conducted through mostly imaging alone. An inventory of the species represented in the study revealed one to two more species per 100 acres than non-enrolled forests.

"To our knowledge, this study is the first of its kind to estimate differences in forest degradation associated with a forest conservation payment program," Mohebalian said. "Field-level data, while more expensive and time consuming, could add value to remotely sensed evaluations. We found that upon closer observation that several of the species being preserved are under great commercial pressure for timber putting them at greater risk of extinction--observations that might be lost in high-level imaging such as those derived from satellites."

The study, "Beneath the Canopy: Tropical forests enrolled in conservation payments reveal evidence of less degradation," recently was published in the current issue of Ecological Economics. Funding was provided by the University of Missouri Research Board and Research Council; the Doris D. and Christine M. Brown Fellowship; the USDA National Needs Fellowship; and a USDA International Science and Education Grant. Bolier Torres at the Unversidad Estata Amazonica; Lucas Lobez at the Universidad National de Misiones (Argentina); and Leonardo Zurita-Arthos and Maria Borja at Universidad San Francisco de Quito contributed to the study. The content is solely the responsibility of the authors and does not necessarily represent the official views of the funding agencies. 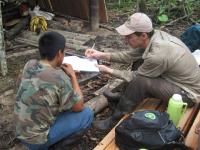