The ability to anticipate the future is key to the survival of all living things. Like humans, worms are capable of forming associative memories--that is, memories that associate a certain sound or smell or tone of voice with a particular outcome.

The famous story of associative learning dates back to Pavlov's dogs. Ivan Pavlov, a Russian physiologist, rang a bell to gather his dogs when he brought them meat. One day, Pavlov noticed that his dogs began to drool at the sound of the bell, before they even saw or smelled their supper. This happened because the dogs had formed an association between the sound of the bell and the meat, so that when they heard the bell they anticipated their meal.

However, little is known about the physiology behind this phenomenon--what happens after we retrieve a memory and how do living things leverage these memories to prepare for future adversities?

In a new study published in Current Biology by Dr. Alon Zaslaver and research associate Dr. Yifat Eliezer at Hebrew University of Jerusalem's Genetics Department, the researchers discovered that even a very basic animal life form like the C. elegans worm has the ability to learn from past experiences. Further, Zaslaver and his team pinpointed the exact neurons that store these memories and the physiological changes the worms undergo when they retrieve memories to cope with future hardships.

"We trained the worms to form associative memories", explained Dr. Zaslaver. "However, that instead of feeding the worms like with Pavlov's dogs, we starved them for a day, and instead of ringing a bell, we sprayed a scent that the worms like. We hoped that by linking this odor with hunger, the worms would learn that from now on this pleasant odor signals a distressed situation."

A day after this "training", the scientists fed the worms well and sprayed the odor once again. Remarkably, the worms quickly entered into a defensive mode and turned on their stress-protective genes. All this happened as soon as they smelled, what used to be, a pleasant odor. "However, when we again subjected the worms to starvation, they were better able to survive the hardship than before their associative-learning training. In a way their PTSD had helped them." Zaslaver observed.

Researchers like Zaslaver like studying the C. elegan worm because it only contains 302 neuron cells; you could name them. "It was wonderful to pinpoint the exact neurons that hold associative memories. It's very rare that you can look at a neuron and say 'Here, here is the memory!'", shared Dr. Zaslaver. With the help of neuro-genetic techniques, the researchers located these neurons and then genetically engineered new worms whose "fight or flight" neurons could be activated simply by shining a light on them. No need to spray the scent this time--the learning was already hardwired inside them. When researchers activated the neurons where the starvation memories lived, the worms immediately moved into stress mode.

A similar response is well-known to us humans. Post-traumatic stress disorder (PTSD) is a mental disorder that individuals may develop after a traumatic event, such as soldiers following combat. Here, the smallest exposure to a similar scene or a relevant scent, like gun powder, can bring back upsetting memories that may trigger anxiety attacks and serious stress disorders.

Zaslaver and his team are currently using their findings, that is, a better understanding of the molecular changes that take place within individual memory neurons and the privation-mode responses they provoke, to alleviate and possibly cure PTSD triggers, such as odor.

Make room on the couch: Worms suffer from PTSD, too 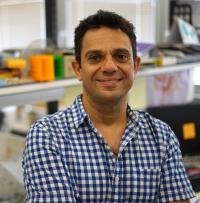