Charles Darwin maintained that the domesticated chicken derives from the red jungle fowl, but new research from Uppsala University now shows that the wild origins of the chicken are more complicated than that.

The researchers mapped the genes that give most domesticated chickens yellow legs and found to their surprise that this genetic heredity derives from a closely related species, the grey jungle fowl. The study is being published today in the Web edition of PLoS Genetics.

“Our studies show that even though most of the genes in domesticated fowls come from the red jungle fowl, at least one other species must have contributed, specifically the grey jungle fowl,” says Jonas Eriksson, a doctoral student at Uppsala University.

“What’s ironic is that Darwin thought that more than one wild species had contributed to the development of the dog, but that the chicken came from only one wild species, the red jungle fowl. Now it turns out that it’s just the opposite way around,” says Greger Larson, a researcher at Uppsala University and Durham University in England.

The yellow leg color is a result of fodder: the more yellow carotenoids there are in the feed, the yellower the legs. The gene that these researchers have now identified codes for an enzyme that breaks down carotenoids and releases vitamin A. This gene is shut down in skin but fully active in other tissues in chickens with yellow legs. The consequence is that yellow carotenoids are stored in the skin in these chickens. This is called a regulatory mutation since the coding sequence of the gene is intact, but its regulation is modified.

“Our study is a clear example of the importance of regulatory mutations in the course of evolution. What we don’t know is why humans bred this characteristic. Maybe chickens with bright yellow legs were seen as being healthier or more fertile than other chickens, or were we simply charmed by their distinct appearance"” wonders Professor Leif Andersson, who directed the project.

The scientists believe that the same gene may well be of significance in explaining the pink color of the flamingo, the yellow leg color of many birds of prey, and the reddish meat of the salmon. These characteristics are all caused by carotenoids. The gene may also influence the skin color of humans to some extent.

Darwin was wrong about the wild origin of the chicken 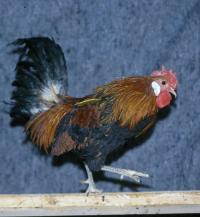