Scientists recently made news by using fossil shark scales to reconstruct shark communities from millions of years ago. At the same time, an international team of researchers led by UC Santa Barbara ecologist Erin Dillon applied the technique to the more recent past.

Human activities have caused shark populations to plummet worldwide since records began in the mid-20th century. However, the scientists were concerned that these baseline data may, themselves, reflect shark communities that had already experienced significant declines. Dillon compared the abundance and variety of shark scales from a Panamanian coral reef 7,000 years ago to those in reef sediments today to discern how reef-associated shark communities have changed since humans began using marine resources in the area.

The results, published in the Proceedings of the National Academy of Sciences(link is external), indicate that shark abundance in the region declined roughly three-fold since prehistoric times, with swifter-swimming species taking a harder hit. Much of this decrease is echoed in historical records, suggesting that sharks in Caribbean Panama were most heavily impacted within the past century.

"These results give us new insight into what a 'healthy' shark community might look like on a coral reef before human exploitation," said Dillon, a doctoral student in the Department of Ecology, Evolution, and Marine Biology. "And they can help us set more appropriate and location-specific baselines for management and conservation."

With their cartilaginous skeletons, sharks don't readily fossilize. Often seemingly all that remains of an ancient shark is its hard teeth. But under the right conditions, a closer look at the surrounding sediments will reveal hundreds of microscopic shark scales only a few times thicker than a human hair. Just like the animal's teeth, shark scales are composed of dentin with a hard enamel surface. Researchers call them dermal denticles, meaning "skin teeth," and believe the two are essentially the same structures -- just in different parts of the body.

Scientists often rely on microfossils to reconstruct ancient ecosystems. Items like scales, pollen grains and plankton shells can provide a wealth of information about the conditions and denizens of past ecosystems that aren't preserved in large fossils. What's more, sharks shed a lot more scales in their lifetime than teeth, so dermal denticles can offer paleo-ecologists much more material to analyze than teeth do.

Dillon and her team were fortunate to have access to a fossil reef in Bocas del Toro, on Panama's Caribbean coast. Normally, ancient reefs are entombed under the living coral, but construction had exposed the site, enabling the scientists to collect samples over several years before it was filled in.

They collected sediments that had accumulated within the fossil reef. Debris that settled between the fingers of branching coral was protected from extensive mixing with sediments of different ages. This essentially preserved a time capsule of material from the ancient reef as it accreted.

The team used radiometric dating to estimate the age of the reef. Corals incorporate trace amounts of uranium, but not thorium, into their skeletons as they grow. Scientists can use the predictable rate at which uranium decays into thorium to determine the age of a coral sample. Using this method, the authors dated corals on the fossil reef to around 7,000 years ago.

Next came the arduous process of separating the denticles from the sediments. Using a solution of acetic acid, what Dillon referred to as "glorified vinegar," she tediously dissolved around 300 kg of carbonate sand -- enough to fill two bath tubs -- to a manageable 400 g of residual material, which she then sorted through under a microscope to find the scales.

Different denticle shapes correspond with different functions. For example, thin scales with points and ridges reduce drag, and are found on sharks like great hammerheads and silky sharks that swim fast. Ridge spacing also matters, with animals that reach fast burst speeds tending to sport narrower ridges. Meanwhile, animals like nurse and zebra sharks, which spend their time near tough substrates, tend to have thick, plate-like scales that offer abrasion protection. "They're sort of like armor," Dillon explained. Accounting for the form and abundance of different scales provided the team with a sense of what types of sharks inhabited the ancient reef as well as their relative numbers.

That said, just as different parts of the mouth sport differently shaped teeth, scale morphology also varies across a shark's body. Given this variability, it's nearly impossible to match an isolated scale to a specific species, as can often be done with teeth. That's why Dillon and her colleagues stuck to broad ecological categories of sharks in their paper.

"We showed that tiny shark scales can be well-preserved and found in high enough abundances to reconstruct shark baselines over long ecological timescales," Dillon said, "and we found about a 71% decrease in total shark abundance between the mid-Holocene -- before major human impact in our study region -- and now." These prehistorical reefs would have had similar environmental conditions to those of today, she added, with the primary difference being that they predate the earliest evidence of human occupation in this part of Panama.

The authors also discovered that the types of sharks found on these reefs shifted between prehistoric times and today. Midwater swimmers, like requiem and hammerheads, declined more than demersal species, like the nurse shark. "If you went snorkeling on these reefs a couple thousand years ago, not only would sharks have been a more common sight but there would have been relatively more fast-swimming pelagic sharks," she said.

Yet, Dillon was struck by the fact that sharks of all types declined over this time period. "If fishing were the only driver, then we wouldn't expect to see such a big drop in nurse sharks over time because they have low commercial value and are rarely targeted by fisheries in the region," she said. "But we did." This suggests that the observed shark declines weren't simply the result of direct impacts on the animals, like overfishing, but might also have stemmed from indirect factors like the loss of reef habitat or available prey.

Dillon and her co-authors also looked at historical accounts of shark abundance through time. "We found that the biggest decline in shark abundance, according to these records, occurred in the latter half of the 20th century," she said. Between these accounts and the results from the fossil record, the evidence suggests that most of the shark declines in this location happened within the past 100 years.

The study's findings provide insight into shark ecology as well as important context for the numbers of sharks observed on reefs today. Most modern time-series data of shark abundance come from places with well-studied commercial fisheries, and often data collection starts well after fishing had commenced. This makes it difficult to be certain how many sharks were present before human activities began impacting the ocean, as well as the long-term ecological consequences of shark declines.

Dillon plans to continue investigating dermal denticles. She is currently studying variation in the rates at which different shark species shed their scales at the Aquarium of the Pacific. If one species sheds much faster than another, that species will leave behind more scales even if there the two populations are the same size.

She and her colleagues are also collecting sediment cores from regions with different human and ecological histories to track high-resolution trends in scale types and abundances over the last several millennia.

Using shark scales to reconstruct past abundances and diversity is a relatively new methodology, and this is the first time it's been applied to questions related to shark management and conservation. "Before this, we didn't really know just how to answer the question of how abundant sharks were on intact coral reefs before human impact," Dillon said, adding that she hopes other researchers take advantage of this powerful technique and apply it to other locations around the world. 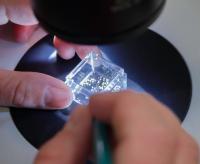