Silicon nanowires are attracting significant attention from the electronics industry due to the drive for ever-smaller electronic devices, from cell phones to computers. The operation of these future devices, and a wide array of additional applications, will depend on the mechanical properties of these nanowires. New research from North Carolina State University shows that silicon nanowires are far more resilient than their larger counterparts, a finding that could pave the way for smaller, sturdier nanoelectronics, nanosensors, light-emitting diodes and other applications.

"The mainstream semiconductor industry is built on silicon," says Dr. Yong Zhu, assistant professor of mechanical engineering at NC State and lead researcher on this project. "These wires are the building blocks for future nanoelectronics." For this study, researchers set out to determine how much abuse these silicon nanowires can take. How do they deform – meaning how much can you stretch or warp the material before it breaks? And how much force can they withstand before they fracture or crack? The researchers focused on nanowires made using the vapor-liquid-solid synthesis process, which is a common way of producing silicon nanowires.

Zhu and his team measured the nanowire properties using in-situ tensile testing inside scanning electron microscopy. A nanomanipulator was used as the actuator and a micro cantilever used as the load sensor. "Our experimental method is direct but simple," says Qingquan Qin, a Ph.D. student at NC State and co-author of the paper. "This method offers real-time observation of nanowire deformation and fracture, while simultaneously providing quantitative stress and strain data. The method is very efficient, so a large number of specimens can be tested within a reasonable period of time."

As it turns out, silicon nanowires deform in a very different way from bulk silicon. "Bulk silicon is very brittle and has limited deformability, meaning that it cannot be stretched or warped very much without breaking." says Feng Xu, a Ph.D. student at NC state and co-author of the paper, "But the silicon nanowires are more resilient, and can sustain much larger deformation. Other properties of silicon nanowires include increasing fracture strength and decreasing elastic modulus as the nanowire gets smaller and smaller."

The fact that silicon nanowires have more deformability and strength is a big deal. "These properties are essential to the design and reliability of novel silicon nanodevices," Zhu says. "The insights gained from this study not only advance fundamental understanding about size effects on mechanical properties of nanostructures, but also give designers more options in designing nanodevices ranging from nanosensors to nanoelectronics to nanostructured solar cells."

The study, "Mechanical Properties of Vapor-Liquid-Solid Synthesized Silicon Nanowires," was co-authored by Zhu, Xu, Qin, University of Michigan (UM) researcher Wei Lu and UM Ph.D. student Wayne Fung. The study is published in the Nov. 11 issue of Nano Letters, and was funded by grants from the National Science Foundation and NC State. 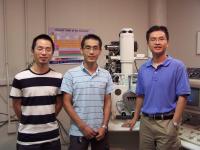 Dr. Zhu and his team.