Equatorial Asia, which includes Indonesia, Malaysia, Papua New Guinea, and surrounding areas, experienced devastating biomass burning in 2015 due to the severe drought condition induced by the extreme El Niño and a positive anomaly of the Indian Ocean dipole. This biomass burning emitted a significant amount of carbon, mainly in the form of carbon dioxide (CO2), into the atmosphere.

Equatorial Asia has very few ground-based stations that observe CO2 and other related atmospheric constitutents. Meanwhile, a few satellites could observe atmospheric CO2; however, their observations were less available and subject to errors due to cumulus cloulds typical in the tropics and smokes from the biomass burning.

To estimate the fire-induced carbon emissions from Equatorial Asia for 2015, the research team of the National Institute for Envrionmental Studies (NIES), Japan, and Meteorological Research Institute (MRI), Japan, expoloited high-precision observations onboard commercial passenger aircraft and a cargo ship that traveled in Equatorial Asia. These observations are unique because measurements are made on a moving platform, enabling to capture three-dimensional gradients of atmospheric CO2 concentrations. The aircraft observations are conducted by the NIES-MRI collaborative research project named CONTRAIL. The shipboard observations are operated by NIES as a part of the Global Environmental Monitoring project.

Using these aircraft and ship observations, the team performed an inverse analysis, which is based on numerical simulations of atmospheric transport, and estimated that the amount of carbon emitted from Equatorial Asia in September - October 2015 was 273 Tg C. The validity of the simulation-based analysis was carefully evaluated by comparing the simulated atomospheric concentrations with those of the observations, not only for CO2, but also for carbon monoxide, which was used as a proxy for combustion sources. In fact, this estimate is slightly smaller than the estimates of previous studies. However, nearly 300 Tg C emissions for only two months are extraordinary because they are comparable to the annual CO2 emissions from Japan.

"Our analysis is the first study that used in-situ high-precision observations for estimating the fire-induced emissions from Equatorial Asia for 2015, which contributes to improving our understanding of biomass burning in this region. It is considered that biomass burning here is dominated by fires in peatland, which has a remarkably high carbon density. Because Equatorial Asia has a significant amount of peatland, the region has a distinct role in the global carbon cycle despite its small terrestrial coverage", Yosuke Niwa (NIES & MRI), the leading author of the study, said. "Peatland forms over thousands of years. Therefore, it is difficult to restore carbon in burnt peatland. Meanwhile, forests could recover by taking CO2 from the atmosphere. However, such CO2 uptake by forest regrowth would not be large enough if the burnt land was converted to a crop field or fires frequently occurred at the same place", said Akihiko Ito (NIES), a coauthor of the study who works on terrestrial biosphere simulations. "It is important to keep on monitoring atmospheric CO2 concentrations. Despite difficult circumstances due to the COVID-19 pandemic, these observations are ongoing thanks to great efforts of the commercial companies that operate the aircraft and the ship. To provide useful information for mitigating climate change, we will continue these observations for many years to come", Toshinobu Machida (NIES), the leader of the CONTRAIL project, said. 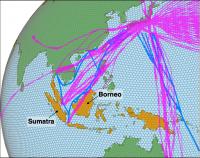