Computer scientists at Microsoft Research and the University of California, San Diego have developed a system that combines a mobile application and sensor to detect stress in parents and delivers research-based strategies to help decrease their stress during emotionally charged interactions with their children. The system was initially tested on a small group of parents of children with ADHD.

The system, called ParentGuardian, is the first to detect stress and present interventions in real-time—at the right time and in the right place. It combines a sensor worn on the wrist with a smart phone and tablet, as well as a server that analyses the data from the sensor.

Laura Pina, a Ph.D. student in computer science at the University of California, San Diego and former intern at Microsoft Research, presented her work at the 8th International Conference on Pervasive Computing Technologies for Healthcare May 20 to 23 2013 in Germany. The interventions are based on Parenting Behavioral Therapy, which has been shown to be effective in addressing the needs of children with ADHD and their parents. The therapy teaches parents the skills they need to work on and has been shown to have long-term effects for both parent and child. It has been shown to improve self-control and self-awareness in children and reduce parental stress.

Traditionally, parents are taught when or how to use these strategies with their children. But sticking with the therapy is difficult, especially during times of the day that are particularly stressful. ParentGuardian was designed to identify these stressful moments and remind parents of these strategies, which they sometimes forget in the heat of the moment.

"Instead of focusing an individual in need we are looking at how to build and design technology for the family as a whole and what's beneficial for them," Pina said. "We wanted to help parents to be the parents they want to be." Pina worked with 10 parents over 3 months to design ParentGuardian. Parents used the prototype at home for 14 days and wore the stress monitors every day between 6 p.m. and 10 p.m.—a time of peak stress when they were juggling homework, making dinner and assisting their children's other activities. Overall, parents reported that the app was very helpful, giving it an average rating of 5.1 on a scale of 1 to 7.

How the system works

ParentGuardian combines four different pieces. The first is the stress sensor, the second is the phone, which reminds parents of effective strategies and also transmits data from the sensor to a backend server, where the sensor data is analyzed to detect when the parent is stressed. Finally, a tablet serves as a second medium to remind parents of useful interventions. The wrist sensor measures electrical activity on the user's skin. When users experience positive or negative feelings, they secrete very small quantities of sweat, which changes the amount of electricity their skin conducts. The sweat is not visible to the naked eye, but is enough to change the amount of electricity conducted by the skin, which is used for stress detection. Users also self-reported when they were feeling stress throughout the day as a form ground truth.

Researchers then compared the data from the sensors with the users' self-reports about stress to train a machine learning algorithm to detect the stress events in real-time.

Tests in the field

All users in the study had children with ADHD and eight out of the 10 parents were mothers. During the first seven days, users trained the app by wearing the wrist sensor and self-reporting on their smart phone when they were feeling stressed. During the second week of testing, users again wore the sensors. But this time, they also received prompts with strategies to manage their stress based on the data their sensors were transmitting. The prompts appeared on users' smart phones—Microsoft's Windows Phone 8, and on Microsoft Surface tablets placed in the areas where they usually spent time with their children—the kitchen, family room or living room.

Parents received these "heat of the moment" prompts no more than once every half hour. Examples of prompts include:

Parents also received a different category of prompts every 90 minutes to two hours during the day. These prompts were more reflective in nature and designed to get parents to think about their parenting styles.

Parents said they found the heat of the moment prompts particularly useful.

"It made me aware of that I need to handle my stress differently. It made me aware of exactly which steps I'm taking to get me to be really stressed out, so it's like self-awareness. If you're stressed and you're screaming at people, you don't understand what's going on. You don't have time to understand what's going on, but if you're aware of the fact that you're stressed and first time it dings at you, you're like, "Oh, okay, I got it," and the next time, like a couple times, you're almost anticipating it to happen. Then you're controlling what you're doing up to that point, […]"

"I heard my phone "ding" and I was too busy to answer it but I knew what it was and I visualized some of the prompts, mostly the "modeling" one and I went about my business then Patricia who has little messes all over the kitchen was asked to clean up after herself […] well in this process of her cleaning she somehow is creating more messes for me and in the past I usually snap at her out of frustration but…I didn't!!! I calmly explained how this makes more work for me and asked her to please focus on one mess at a time and get them cleaned up. It was so well received by her and I'm so proud of myself! Hopefully I can continue in this positive way."

Parents also reported that their partners were more likely to provide support when the smart phone pinged, indicating that the parent was stressed. Some parents took advantage of quiet moments to review reflective strategies and prepare themselves before a stressful situation occurred.

Based on the insights gained this work in collaboration with the VIBE group at Microsoft Research, Pina, Griswold and Hayes, a professor from Department of Informatics at UC Irvine, have applied for a large grant to conduct a study on a larger number of parents. Ideally, all parents, or guardians, and children in a household should wear sensors, Pina said. Some parents in the study reported that the prompts would be even more useful if they occurred before stress reached its peak. Computer scientists will have to find a way to refine their data analysis so that the system doesn't just detect peak moments of stress but also stress build up.

During the second week of the study, the system detected stress accurately 78 percent of the time. Computer scientists would like to have access to voice and other data, which would help them be more accurate. But they have to balance this with the users' need for privacy.

"System design has to be very sensitive to the context of using it in real life, with real people," Pina said. The work was conducted at Microsoft Research, where Pina interned in summer 2013. 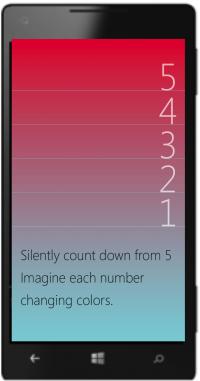