Mutations accumulate in human mitochondrial DNA with age, reports a study published April 14 in Cell Stem Cell. The finding has implications for potential therapies using induced pluripotent stem (iPS) cells, which are generated from patient skin cells and may be used to repair damaged tissue or organs. IPS cells derived from an elderly patient's cells could contain faulty mitochondrial DNA that could undermine the iPS cells' therapeutic value.

As a result, iPS cell lines intended for therapeutic use should be screened and checked for mitochondrial DNA mutations, say co-senior authors Shoukhrat Mitalipov, director of the Center for Embryonic Cell and Gene Therapy at Oregon Health & Science University, and Taosheng Huang, a medical geneticist and director of the Mitochondrial Medicine Program at Cincinnati Children's Hospital.

"People tend to look just at the nuclear genome," says Huang. "But if you want to use iPS cells in a human, you must check for mutations in the mitochondrial genome."

Mitochondrial DNA contains genes that support basic needs, such as energy production for the cell. While each cell stores two copies of nuclear DNA, there may be a thousand copies of the mitochondrial genome in a single cell. Those copies can contain both mutated and healthy mitochondrial DNA.

"We call it the freckled effect," says Huang. "Every single cell can be different. Two cells next to each other could have different mutations or different percentages of mutations."

These mutations can be replicated in iPS cells. Prior to the creation of a therapeutic iPS cell line, a collection of cells is taken from the patient. These cells will be tested for mutations. If the tester uses Sanger sequencing, older technology that is not as sensitive as newer next generation sequencing, any mutation that occurs in less than twenty percent of the sample will go undetected. But mitochondrial DNA mutations might occur in less than twenty percent of mitochondria in the pooled cells. As a result, mutation rates have not been well understood. "These mitochondrial mutations are actually hidden," says Mitalipov.

Since each iPS cell line is created from a different cell, each line may contain different types of mitochondrial DNA mutations and mutation loads. To choose the least damaged line, the authors recommend screening multiple lines per patient. "It's a good idea to check the iPS clones for mitochondrial DNA mutations and make sure you pick a good cell line," says Huang.

The mitochondrial genome is relatively small, containing just 37 genes, so screening should be feasible using next generation sequencing, says Mitalipov. "It should be relatively cheap and do-able." 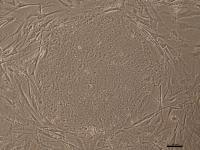 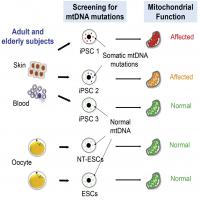