In 1998, ocean temperatures soared, and the world experienced its first significant coral bleaching event. From the Great Barrier Reef to Indonesia to Central America, corals turned white and ghostly. Many of them died. And this was just a hint as to what was to come. Over the following two decades, the bleaching became more severe and more frequent, with future predictions suggesting that this trend will continue. But not all corals are affected equally.

"Acropora corals are especially susceptible to bleaching and are expected to decline in the future," said Professor Noriyuki Satoh, from the Marine Genomics Unit at the Okinawa Institute of Science and Technology Graduate University (OIST). "This is an issue because Acropora corals are very important. They grow quickly compared to other corals, which helps with reef growth, island formation, and coastal protection. And they also provide a habitat for more than a million species of marine organisms."

To shed light on whether Acropora corals are genetically equipped to handle a warmer ocean, researchers from OIST, the University of Tokyo and Seikai National Fisheries Research Institute have sequenced and analyzed the genomes of 15 species of Acropora coral, as well as three species of coral from outside this genus.

A genome is the complete set of an organism's DNA and contains all its genes, which, over hundreds of millions of years, have undergone random mutations. By analyzing what mutations are shared across different species, scientists can come to understand when organisms evolved and when they split from close relatives to form new species. This study, published in Molecular Biology and Evolution, has revealed the evolutionary history of Acropora corals, with some surprising results.

"We found that the Acropora ancestor diverged from other corals around 120 million years ago," Professor Satoh explained. "And the diversification of Acropora corals, when we start to see a lot of different species appear, occurred 25-60 million years ago. For both events, this is much earlier than previously thought."

This is an important find as it means that Acropora diversified when the world's oceans were much warmer than today. They then experienced an ice age and survived, which hints that they could have the genetic make-up to handle vast changes in temperature.

Lead author Dr. Chuya Shinzato, a former staff scientist at OIST and now an Associate Professor at the University of Tokyo, analyzed the genomes and found that these 15 species could be divided into four groups. Dr. Shinzato and the group then compared in detail which genes had been conserved and which genes were lost.

It was revealed that before this coral genus diversified, several mutations occurred which saw it gain 28 additional gene families. These genes likely contributed to this diversification, as well as the genus's success at spreading across the globe and its ability to handle a range of temperatures.

"There were three notable additions from this time period, which could allow these corals to withstand high-stress environments," Professor Satoh said. "Two of these have been identified before and are associated with responding to environmental stress, usually heat."

But the finding of the third gene, which encodes DMSP lyase, is significant as this is the first time that a genome analysis has revealed its existence in Acropora corals. This gene allows the corals to produce a compound, dimethyl sulfide, in the water that, when transferred into the air, aids in the formation of clouds. This suggests that when temperatures get too high, the Acropora corals might be able to create small cloud umbrellas, which can protect them by providing shade and filtering out the light.

Although this research has shed light on the evolutionary history of an important genus of coral, Professor Satoh emphasized that it is still hard to say whether this genus will be able to survive the predicted ocean warming and coral bleaching events. "Yes, Acropora corals have withstood vast changes in temperature in the past and, yes, they have these genes that might allow them to somewhat mitigate extreme heat, but the speed in which current climate change is occurring might still exceed their ability to adapt. On the other hand, this vast information of coral genomes provides a basis for future studies of coral biology." 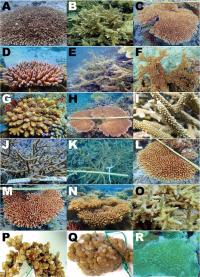 The Corals in This Study