COLUMBIA, Mo. -- In "Star Trek: The Next Generation," Geordi La Forge is a blind character who can see through the assistance of special implants in his eyes. While the Star Trek character "lives" in the 24th century, people living in the 21st century may not have to wait that long for the illuminating technology.

Kristina Narfstrom, a University of Missouri-Columbia veterinary ophthalmologist, has been working with a microchip implant to help blind animals "see." According to Narfstrom, the preliminary results are promising.

"About one in 3,500 people worldwide is affected with a hereditary disease, retinitis pigmentosa, that causes the death of retinal cells and, eventually, blindness," Narfstrom said. "Our current study is aimed at determining safety issues in regard to the implants and to further develop surgical techniques. We also are examining the protection the implants might provide to the retinal cells that are dying due to disease progression with the hope that natural sight can be maintained much longer than would be possible in an untreated patient."

Narfstrom, the Ruth M. Kraeuchi-Missouri Professor in Veterinary Ophthalmology, is working primarily with Abyssinian and Persian cats that are affected with hereditary retinal blinding disease. The cat's eye is a good model to use for this type of research because it is very similar to a human eye in size and construction, so surgeons can use the same techniques and equipment. Cats also share many of the same eye diseases with humans. The Abyssinian cats that Narfstrom is working with typically start to lose their sight when they are around one or two years old and are completely blind by age four.

To date, Narfstrom has performed surgeries in severely visually impaired or blind cats. During the surgery, Narfstrom makes two small cuts into the sclera, the outer wall of the eyeball. After removing the vitreous, which is the gelatinous fluid inside the back part of the eyeball, Narfstrom creates a small blister in the retina and a small opening, large enough for the microchip, which is just two millimeters in diameter and 23 micrometers (one-millionth of a meter) thick. The chip includes several thousand microphotodiodes that react to light and produce small electrical impulses in parts of the retina.

Narfstrom is working with Optobionics Corporation, the Naperville, Ill., based company that developed the device, and with Machelle Pardue, a researcher with Emory University and the Research Service at the VA Medical Center in Atlanta. 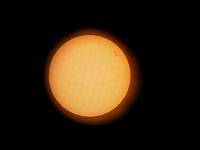 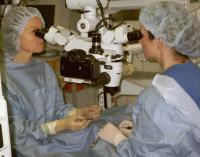