Mushrooms, or Agaricomycetes, are common, conspicuous and morphologically diverse fungi. Most agaricomycete fruiting bodies are ephemeral, so they are extremely rare in fossils. Up to now, all described species of gilled mushrooms, or Agaricales, have been known exclusively from amber. Among them, two forms are from the Mesozoic, including the earliest mushrooms, Palaeoagaracites antiquus from 99-million-year-old Burmese amber, and the slightly younger Archaeomarasmius leggetti from New Jersey amber (about 90 million year old). The remaining three species are known from early Miocene Dominican amber, some 20-million-year-old. Evidence indicating the origin and early diversification of Agaricomycetes is very limited.

Recently, a research team led by Prof. HUANG Diying from Nanjing Institute of Geology and Palaeontology (NIGPAS) of the Chinese Academy of Sciences reported a diversity of gilled mushrooms and mycophagous rove beetles from Burmese amber, the latter belonging to Oxyporinae, modern members of which exhibit an obligate association with soft-textured mushrooms. The results were published in Nature Communications on 16th March, 2017.

All the mushrooms they studied are very well-preserved and can be grouped in four forms. A stalk and a complete intact cap containing distinct gills are visible in most of these amber mushrooms. The new discovery suggests a long-term evolutionary stasis of body form for at least 99 million years and highlights the palaeodiversity of mushrooms, pushing back the presence of agarics by at least 25 million years.

More interestingly, the mouthparts of these early oxyporine rove beetles, including enlarged mandibles and greatly enlarged apical labial palpomeres with dense specialized sensory organs, match those of modern taxa and indicate a mushroom feeding habit of these beetles. The diverse and morphologically specialized oxyporine beetles had also been appeared by the Early Cretaceous, some 125 million years ago. Their finding displays an ancient ecological community assembling diverse mushrooms and beetles and established on specialized trophic interaction by this early date. 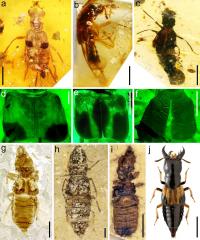