Lensless imaging technology introduces computing power into the conventional optical imaging system. The lensless camera becomes compact and easy-to-build. The earliest lensless camera could be pinhole camera, but the low light throughput limits its popularization. Then coded aperture cameras extend the idea of a pinhole camera by replacing the pinhole with a mask which allows more light throughput. Since the image reconstruction in lensless imaging is susceptible to the noise, current implementations need multiple shots or strict calibrations to enhance robustness.

In a new research article published in Light Science & Application, the researchers from Tsinghua University in China and MIT in the US introduce a Fresnel zone plate which is called Fresnel zone aperture (FZA) to develop a thin lensless camera. Though the Fresnel zone plate could be used as an imaging element similar to the lens, its long focal length could not support thin structure.

It is not easy to obtain the light field because the sensor can only record the intensity while the phase information is lost. Since holography can record an interference pattern to reproduce the light field, the researchers seek to extend the concept of holography for incoherent illumination. It is interesting that the shadow of Fresnel zone plate has the same form with the point source hologram. That means the object could be encoded into hologram by Fresnel zone plate under the incoherent illumination. Then the image could be reconstructed by backpropagation method.

In FZA imaging system, the Fresnel zone plate is placed only three millimeters from the sensor. Jiachen and his colleagues took a series of pictures which are displayed on an LCD monitor. The incident light rays from a point on the object pass through the FZA and cast the shadow of FZA on the sensor. The resulting image from the camera sensor show distinct fringe characteristic similar to a hologram.

How to reconstruct the image from the single-shot 'hologram'? This problem looks challenging. It is well known that twin-image effect is the inherent problem in holography. The twin image likes a defocused image superimposes on the original image, and reduces the reconstructed image quality. The phase shifting is a valid method to eliminate twin image but it needs at least four captures. Inspired by compressive holography, the researchers introduced the total variation (TV) constraint into image reconstruction so that the twin image which does not satisfy the constraint of minimum TV could be effectively eliminated. Thanks to the compressive sensing algorithm, the single-shot imaging without any calibration could be realized for the thin lensless camera.

This computational imaging architecture can significantly drive down the cost of camera. Since the camera could be tightly integrated by depositing the FZA pattern on the cover glass of sensor, the assembly of camera could be reduced into the fabrication of sensor. This thin lensless camera has great potential for super-thin smart phones, home security cameras, autonomous cars, etc.

"We try to open a door for high quality lensless cameras free of noise. The presented technique provides a prototype for the integration of cameras and smart devices. Through a partnership between academia and industry, this technique could become practical," Prof. George Barbastathis says.

For the subsequent works, the researchers will further develop an updated version with hardware and software for the potential customers. 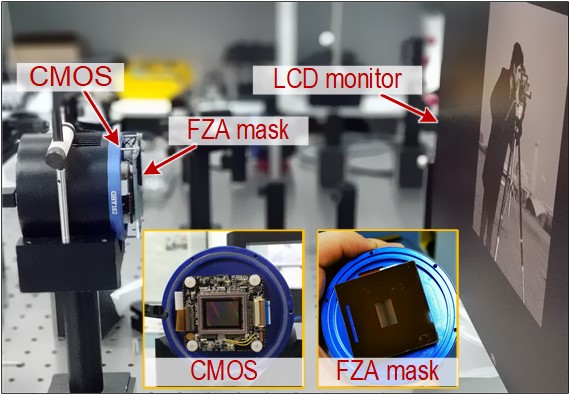