Imagine if you could taste something simply by touching it. Octopuses can do just that with their unique "touch-taste" sense, made possible by the suction-cup-like suckers along each of their eight arms. Now, researchers reporting October 29 in the journal Cell have new evidence as to how this sensory ability works. The findings help to explain how octopuses, and perhaps other marine organisms, explore the seafloor by tasting objects underwater with a simple touch.

"Aquatic chemosensation has long been associated with distant waterborne signaling via hydrophilic chemicals while terrestrial sensation utilizes detection of airborne volatile molecules that are poorly soluble in water," says Nicholas Bellono (@NBellono), a molecular and cellular biologist at Harvard University. "Nonetheless, aquatic organisms produce and respond to a variety of hydrophobic compounds, suggesting a distinct form of aquatic 'taste' mediated by contact-dependent chemosensation of insoluble molecules that do not readily diffuse in water. By identifying specific chemotactile receptors as mediators of this octopus sense, our study also provides a molecular basis for aquatic 'taste' of poorly soluble molecules."

Bellono and his colleagues first showed that the California two-spot octopus (Octopus bimaculoides) responded differently when its suckers touched a prey item versus another object. The finding confirmed that their suckers have a kind of taste-touch ability.

To learn more, the researchers looked more closely at the octopuses' suckers to identify the sensory cells involved. They discovered that the sucker did indeed include discrete populations of sensory cells.

But how do chemical signals received via those suckers work together with other physical stimuli to decide whether an octopus grabs what it touches? While there's much more to learn, this study shows that distinct chemotactile receptors form discrete ion channel complexes that detect specific signals and send them on to the nervous system. Bellono suggests that this could serve as a signal filtering system suited to the octopus' uniquely distributed nervous system.

Their findings show that chemicals known as terpenoids act on octopuses' receptors and sensory cells in their suckers to encourage different responses. They note that terpenoids are produced by many marine invertebrates as a defense or warning signal. By detecting these signals with their arms, octopuses might avoid toxic prey. But, the researchers add, many other unknown natural compounds also might stimulate different responses in a similar way.

In future studies, the researchers hope to explore this touch-taste sense in other cephalopods, such as squid, which have two specialized prey-catching tentacles instead of eight long arms.

This raises a series of intriguing questions. Have chemotactile receptors evolved to support these specific behaviors? Do receptors detect specific molecules based on ecological context or behavior? What are the structural mechanisms underlying protein adaptations to mediate different ligand sensitivities and/or biophysical features? How does this contribute to peripheral processing in the unique cephalopod nervous system? Bellono and his team will continue exploring these and other questions.

This research was supported by the New York Stem Cell Foundation, the Searle Scholars Program, the Sloan Foundation, the Klingenstein-Simons Fellowship, the National Institutes of Health, and the Swiss National Science Foundation.

How octopus suckers "taste by touch" 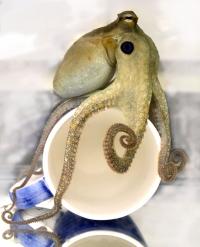 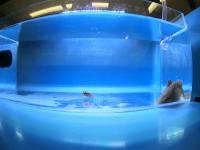